Since my first encounter with Bexley Council it has had five Chief Executives that I know of. You could write to Terry Musgrave, the first of them and get a signed reply but everything went downhill from there.

The next one did a deal with a Council Leader who was subsequently given an unconnected suspended jail sentence, left soon afterwards and has since netted close to a million pounds from the Bexley taxpayer.

After him we had a lapdog who covered up for a dishonest Council until eventually Greenwich Police (Bexley refused to be involved) sent a file to the Crown Prosecution Service alleging Misconduct in a Public Office. Saved by his appointment to a sensitive Government appointed post. Boats must not be rocked. 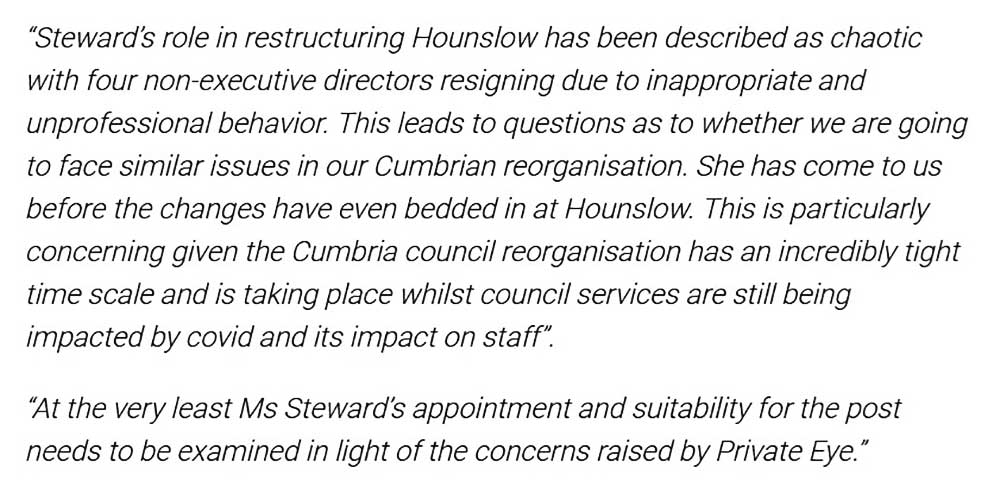 In more recent times a female Chief Executive was appointed whose only claim to fame was her withdrawal of the Press Desk at Council meetings and erecting a barrier between the public and the dangerous people on the other side.

She left with a £94,000 pay cheque only to be replaced by another female Chief Executive who has no claim to fame at all.

A rip-roaring success. Appointed last July and dis-appointed a couple of weeks ago.

Due diligence is not a phrase oft used in Council recruitment circles. The report above was by Cumbria’s minority Green Party and it was ignored. The Greens are evidently not as green as I had imagined.

The report below is from the local newspaper. Ms. Steward is once again on then jobs market. Where next to be unpopular?