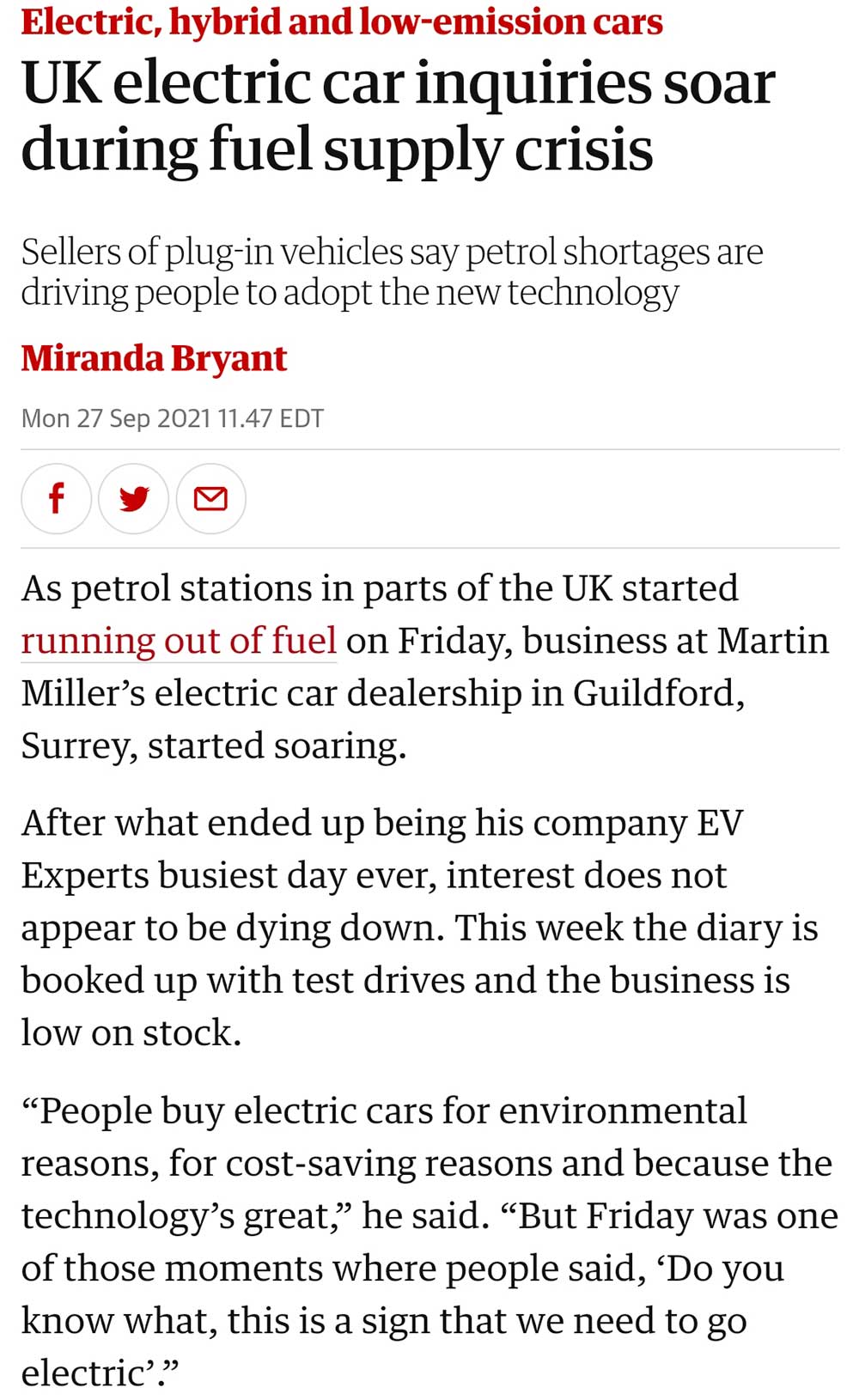 I have seen headlines like this all over the place over the past ten days and it is understandable. I have checked out the nearest petrol station for three consecutive days and it has no petrol. Maybe coincidence but the roads locally are empty and the reports from Bromley today are the same.

An electric car may seem like the obvious solution but they are not immune to being held up by petrol queues. When all vehicles are electric those queues will disappear and probably be replaced by queues for public chargers. They have proved to be notoriously unreliable.

In September Teslas were by far the most commonly bought electric car, nearly 7,000 units compared to also ran Volkswagen at 2,000 in September. Even my old model sold more than 1,000. Keep your eyes open and you can’t get away from them these days.

Charging speeds are increasing but the very best and for the most part unattainable peak is around quarter of an hour for about 150 miles in the tank.

But it is not cheap.

Those 50 kilowatt hours of electricity at a hard to find ultra fast charger would currently cost £34·50. That’s at least five gallons of fossil fuel and you will probably get 250 miles out of that.

Charging as fast as that is rare at the moment but barely a day goes by without me being notified of a price increase. From 39 pence to 42 pence from one of the cheaper operators only yesterday.

Long distance electric motoring can be very expensive. 150 miles on a free charger at Tesco etc. would take all day and probably land you with a parking fine. Useless apart from something for nothing while you do a quick shop.

My three year old electric car is now among the slowest charging but there is nothing more efficient on the road and it can be coaxed into going about 50% further than most given a light foot.

With free solar charging and not driving too far I seem to remember my first year’s motoring worked out at 0·39 pence per mile. If that is not you (solar panels and not too many miles) the only economic way forward is cheap overnight electricity from the likes of Octopus Energy. Four hours at only five pence a unit.

On a home charger you might be able to put in 100 miles for not much over a pound. How long that will last is anyone’s guess.

Unless everything is going in your direction, few long journeys, your own car parking space close to the electricity meter or consumer unit, then you have missed the cheap electric motoring boat.

They are easier and much more fun to drive and probably greener overall but few people will save much compared to the price of ‘gas’.