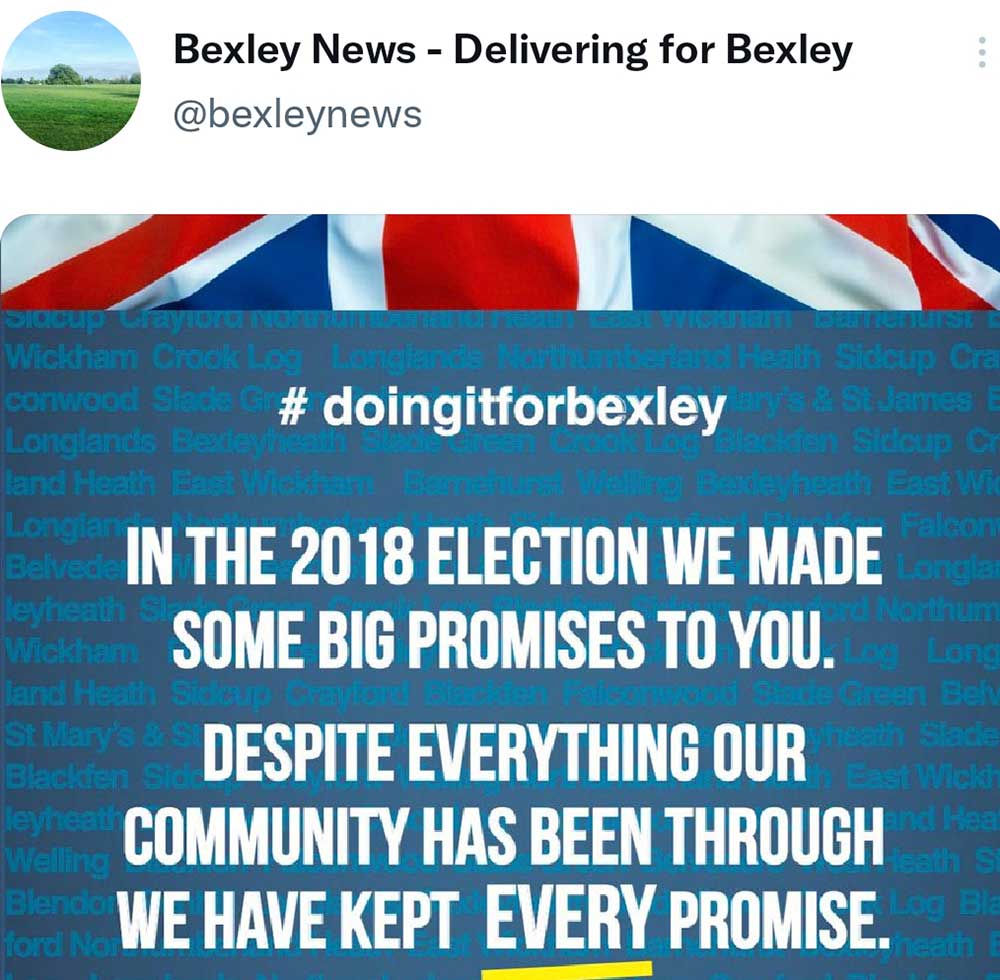 The Tory spinners were out in force yesterday. Boris Johnson was spouting non-Conservative policies in Manchester which even if I supported them I wouldn’t believe given the Prime Minister’s relationship with the truth.

The Conservatives were claiming to have kept all their 2018 manifesto promises. If so that is because they made so few.

• We will keep Council Tax low. (It has increased by the maximum permitted and and only seven other London boroughs charge more.)
• We will generate commercial income. (Don’t mention BexleyCo.)
• All Bexley Schools will be rated as Good or Outstanding. (Jubilee Primary is still rated Inadequate. Any more?)
• We will maintain three weekly cleaning of all residential roads. (Serco!)
• The welfare of children will be central to everything we do. (Closure of Children’s Centres.)
• We will deliver at least two extra hectares of green space. (Uncut grass verges presumably.)
• The Elizabeth Line will be opened and there are plenty of other big transport projects coming. (The model train at Hall Place?)
• We will prioritise social housing. (The inaction is largely responsible for Bexley’s financial predicament.)
• We will create a strong local economy. (Does anyone feel any richer?)

And the claim yesterday…

• We have planted 1,000 street trees. (Has anyone seen them?)
• Bexley named number one recycling borough 16 years running. (Close but not actually true.)
• Children’s Services judged Outstanding (The transformation predated 2018.)
• Lesnes Abbey transformed with a £4m investment. (Another one that predates 2018 and paid for by the Lottery Fund. The final touches were made to it just after the 2018 election but only because the project ran a year late.)
• New Park in Sidcup. (Because they sold off half the old one.)
• Free Internet in town centres. (Paid for by someone else and would you dare get your expensive phone out in Broadway?)