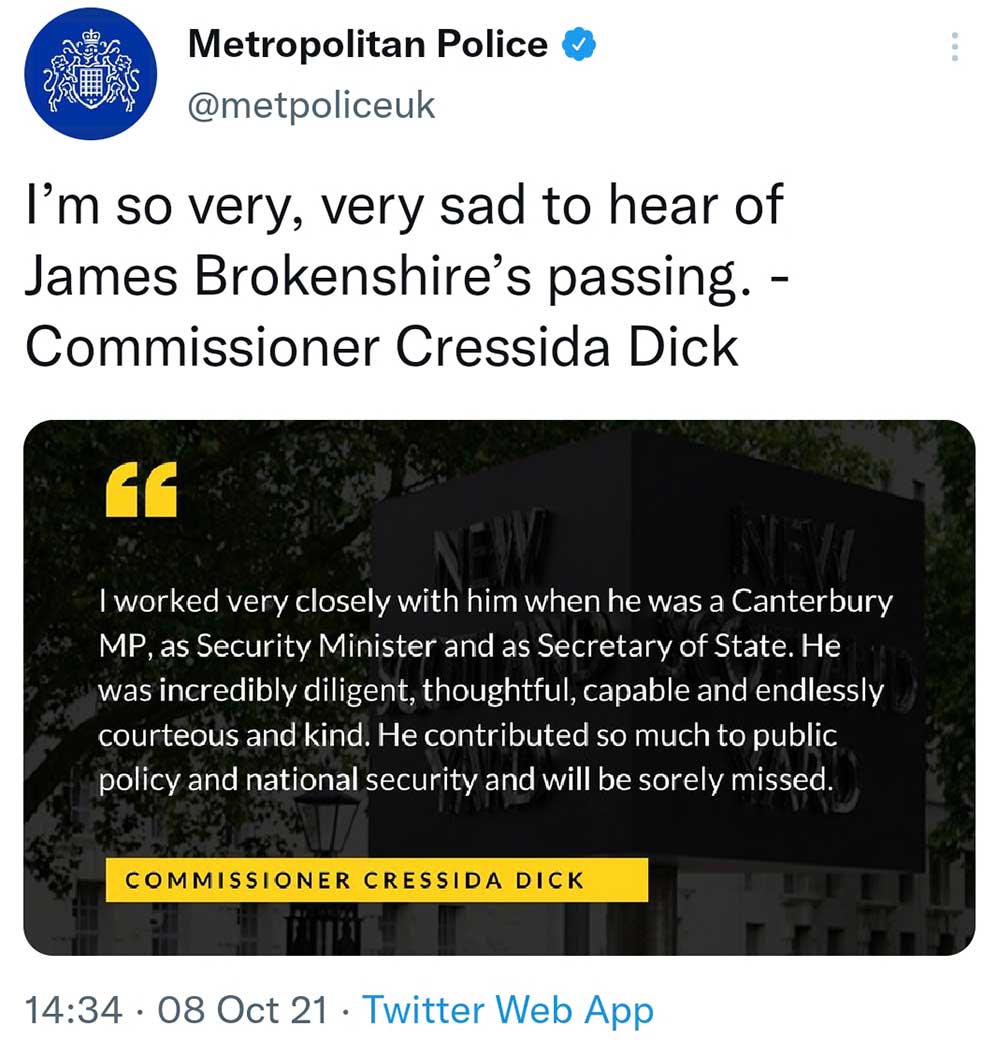 There was an enormous outpouring of grief following the death of James Brokenshire on Thursday. It came from all quarters, all day and from all shades of political opinion. All genuine and sincere.

Metropolitan Police Commissioner Cressida Dick claimed to have worked with him when he was MP for Canterbury. A strange spelling of Hornchurch or Old Bexley and Sidcup, or maybe she didn’t really know him but saw an excuse to jump into the limelight.

Just what was she thinking of? Not poor James that’s for sure. I have never seen Twitter so full of heartfelt tributes.

Country Style
Getting off the train at Abbey Wood yesterday after a two hour return journey to Greenwich - there for barely 20 minutes - I spied a refuse truck in Gayton Road and when nearly home I looked back along Fendyke Road to see an orange jacketed man dragging brown bins into the road.

I was still outside my house chatting when the truck hove into view and backed towards me. I warned the two men that my bin was very heavy but one dragged it effortlessly away and said it was a lightweight.

A neighbour asked how the new management was. “Worse than Serco, they don’t know anything”.

The brown bin collection was a week late, the white bin from last week is still waiting and hoping. (Note: The white bin was emptied at 07:45 this morning.)

If the brown bin gets back on schedule next Friday Bexley Council will owe me five collections and even that is not very fair. I only have a week to fill it up again or I am short changed once more.

Belvedere
The correspondent who started the Belvedere controversy (see Twitter) has sent further comment and so has my local Councillor. My request for information fell into her Junk folder or she might well have been bending my ear sooner.

Meanwhile she reminds me that there is a Public Space Protection consultation going on right now.

Sally Hinkley must be hot stuff on consultations because she was pushing the Abbey Wood Post Office one too.

Joined up thinking
I have to be in Richmond for most of today, hence the minimal blog and not expanding on what Sally had to say yet. I checked that trains would be running to Waterloo East and all was well - but not Sunday.

What I failed to do is check the main line trains to Richmond. Too late I find there are none. Never mind, I have used the District Line for that journey often enough.

Think again, the District Line Richmond branch is closed beyond Turnham Green too. 30 minutes on a bus. Thanks TfL.

Bonkers
I don’t suppose many will care but the alternative routes to www.bexley-is-bonkers.co.uk which used to have subtly different purposes are gradually disappearing. www.bexley-is-bonkers.info will cease to exist on 2nd November. £89 plus VAT to keep it going is just silly. Registration fees seem to have more than doubled in recent years and there is no bottomless pit here.