23 October (Part 2) - Primary Care Services in Bexley. (Whisper it but it barely exists)

Agenda item 7 at the Communities Scrutiny meeting dealt with Primary Care and began with a slide presentation and a commentary for those unable to read. 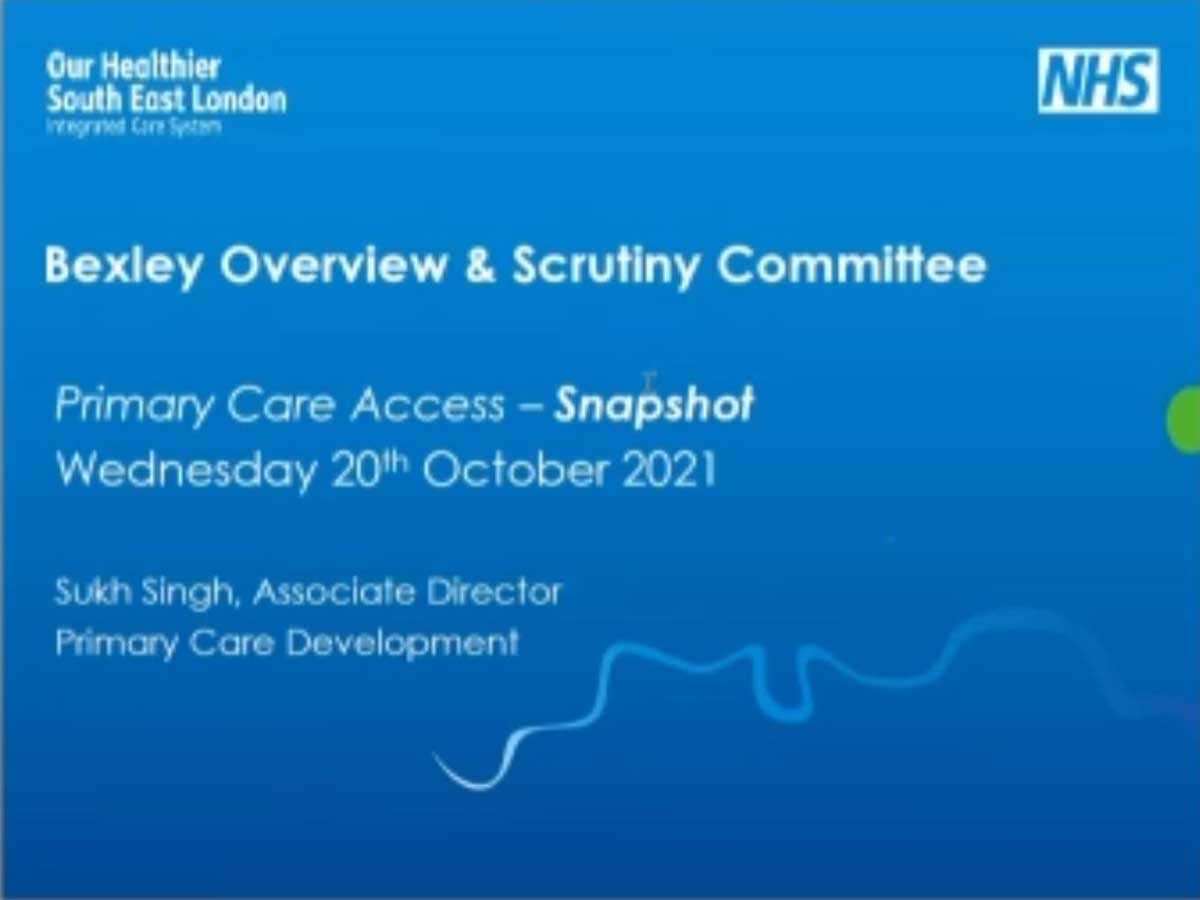 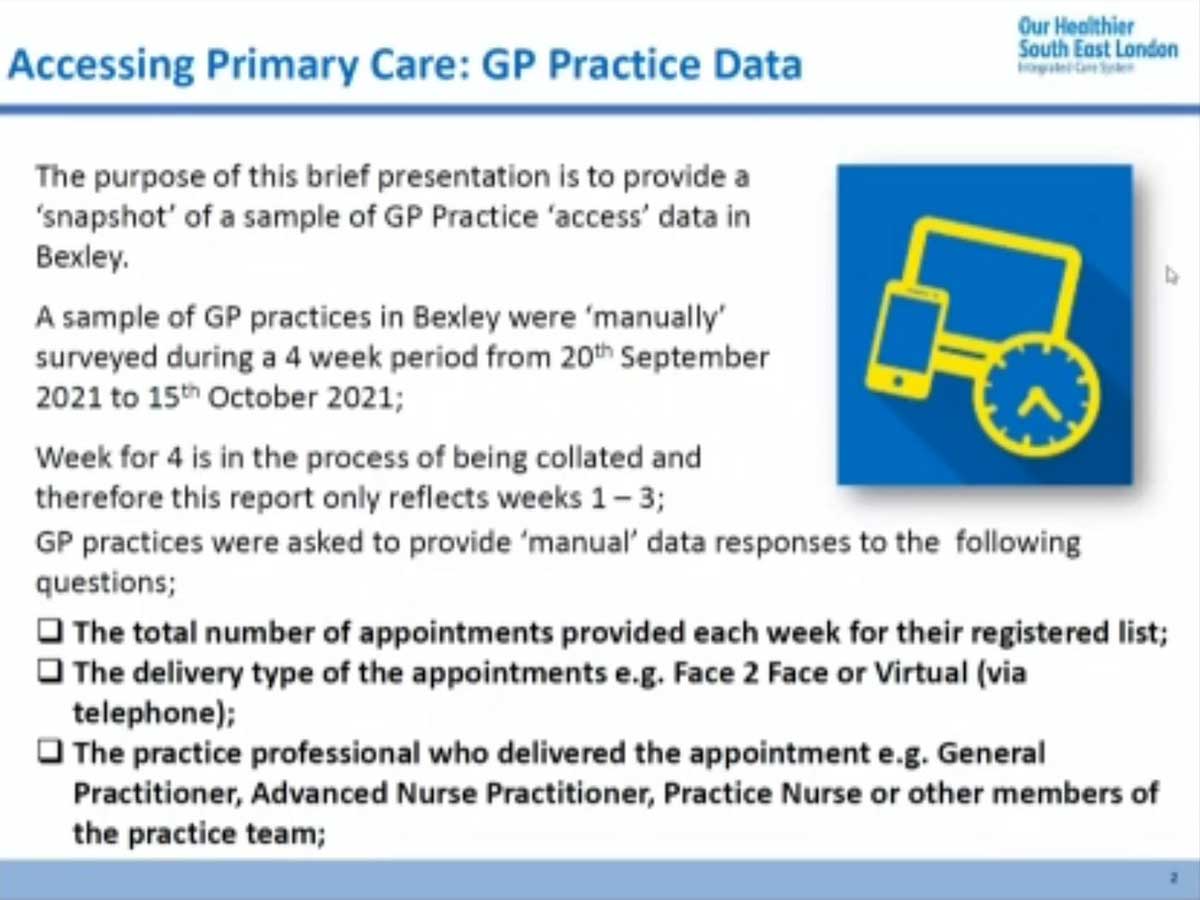 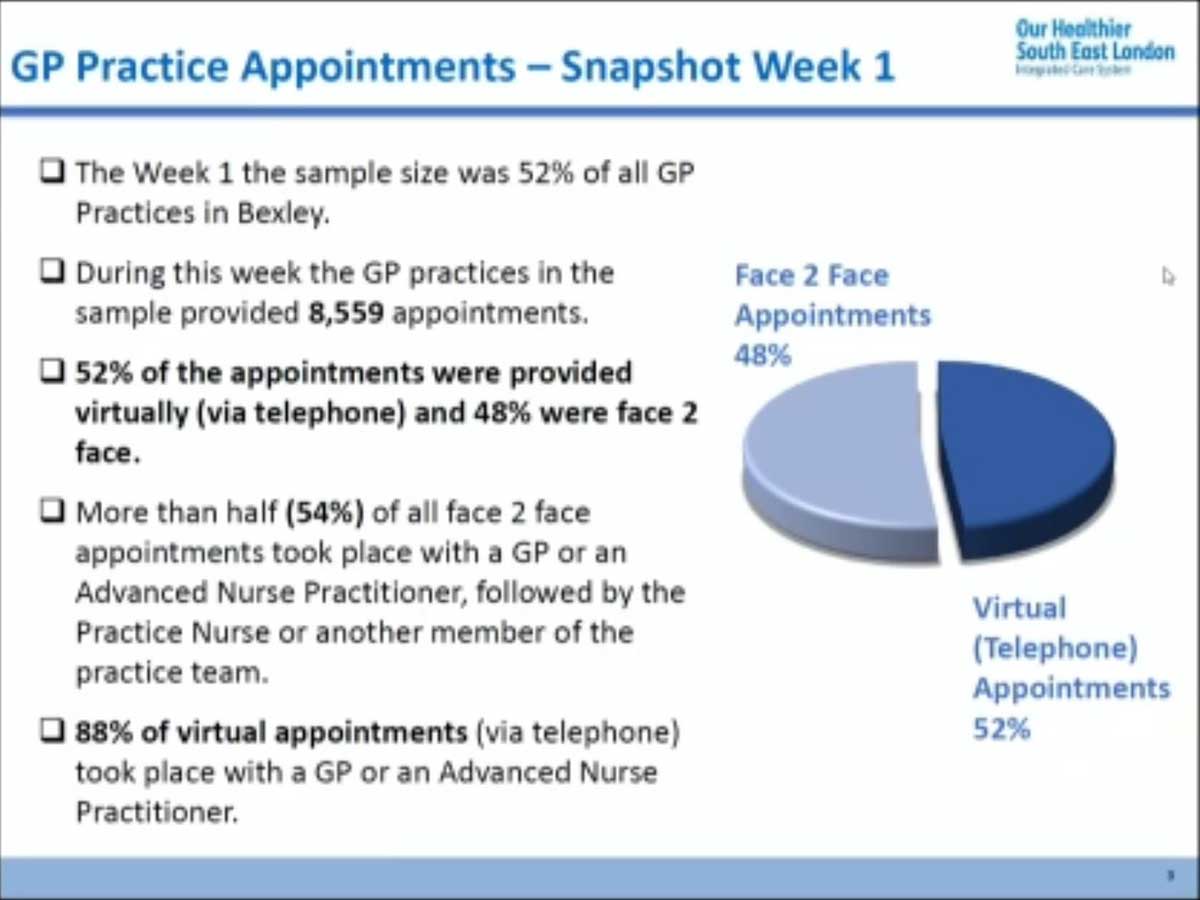 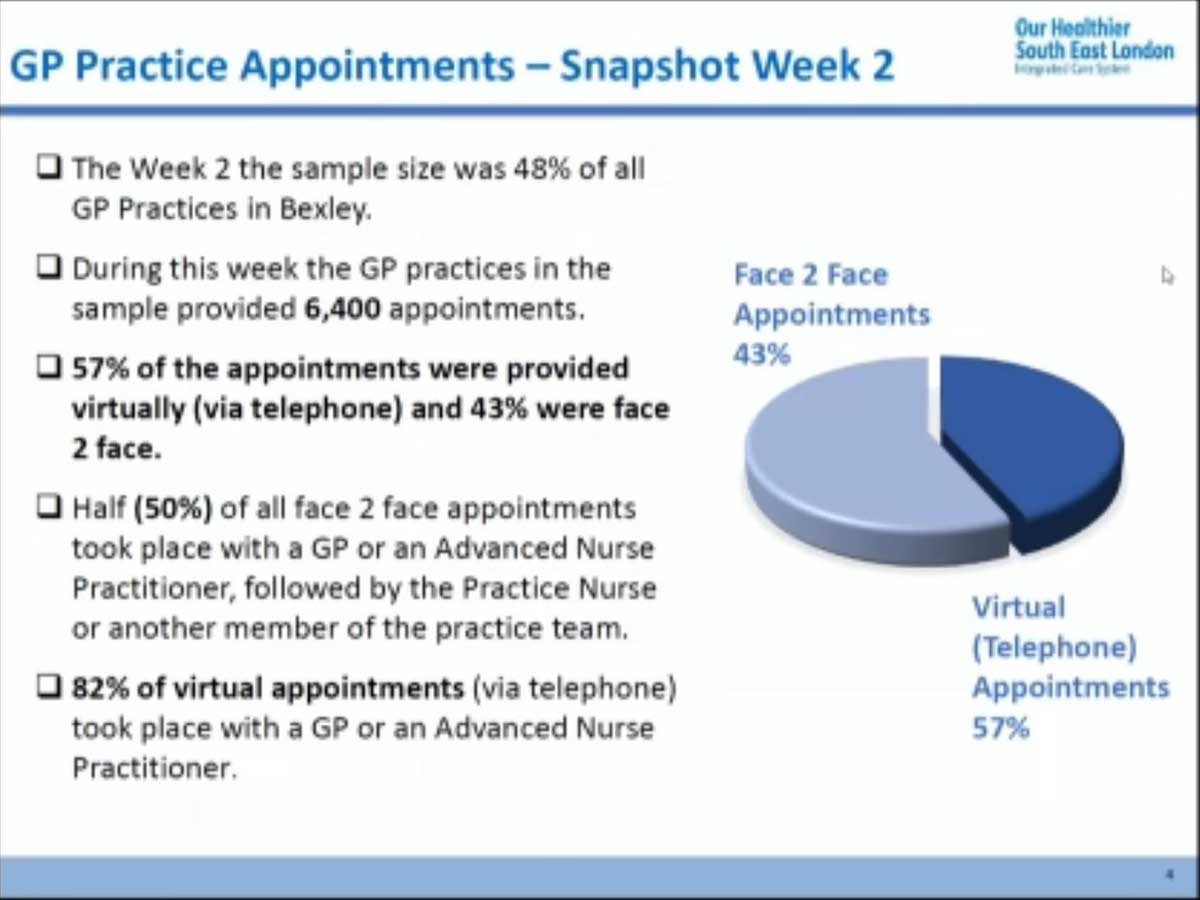 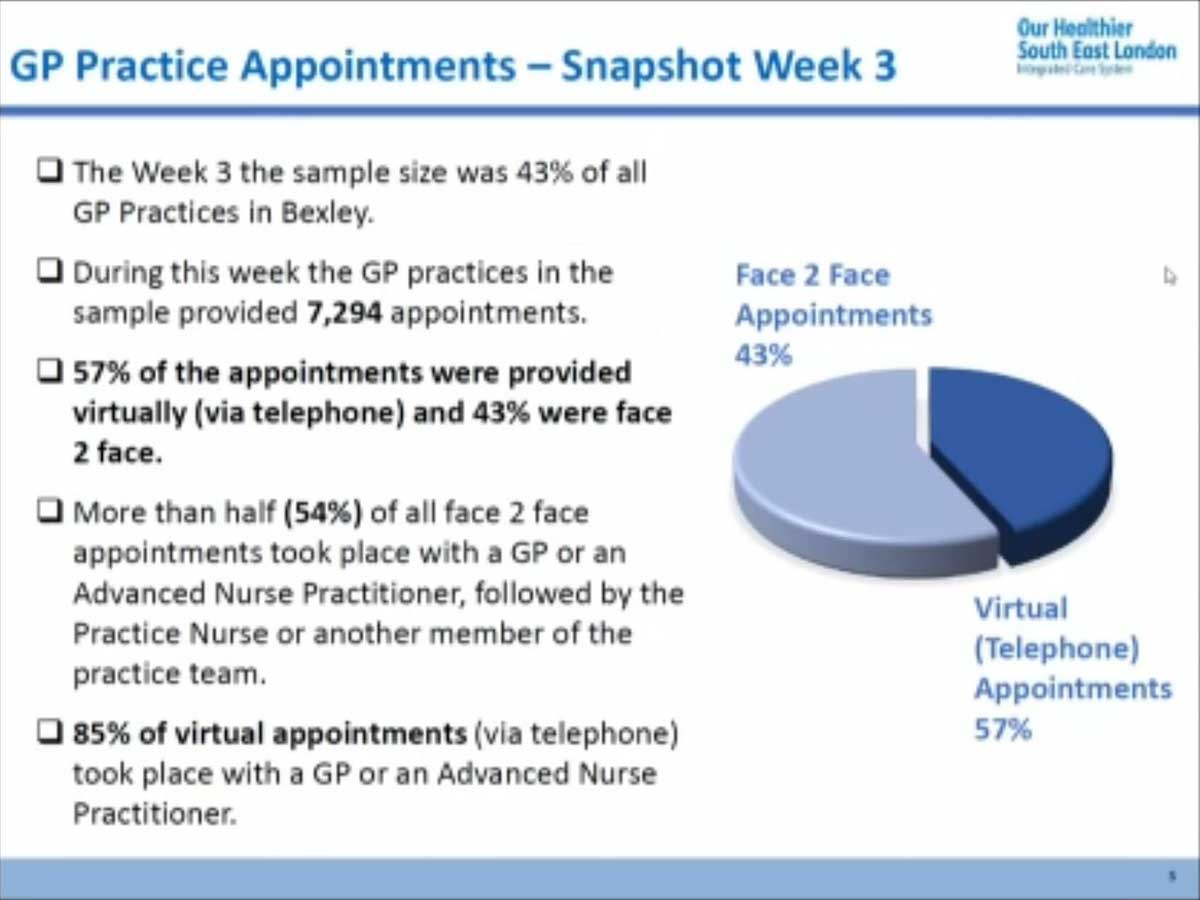 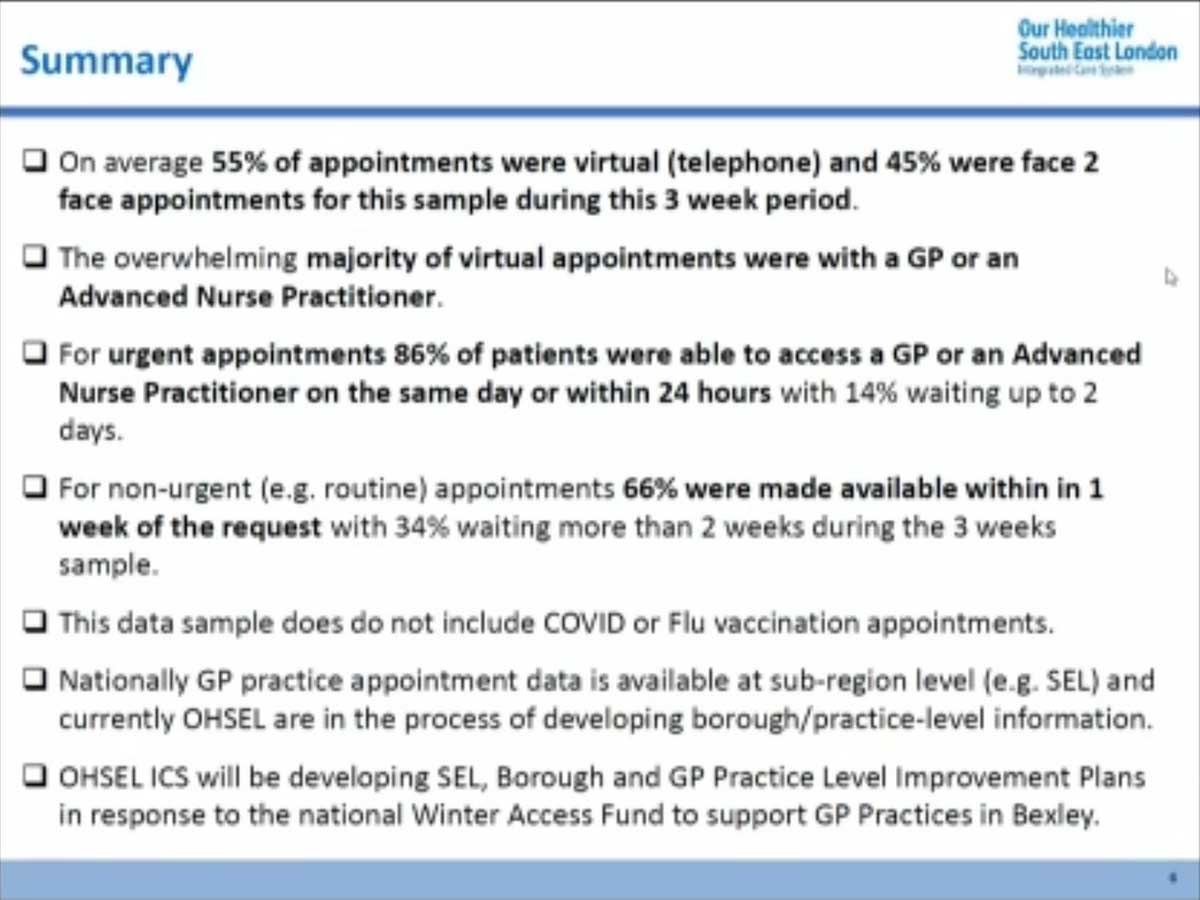 Click image to expand and step through one by one.

A survey had been conducted locally on access to GPs and 685 residents responded. The summary was said to be “that there is a lot of public support for the NHS and people came out and clapped.”

“There has been lots of media coverage on protecting the NHS but residents have seen very little communication from Primary Care which has caused confusion. Pre-pandemic problems like long waits for the phone to be answered and long waits for appointments have all been exacerbated and made worse. Primary Care has remained open and people have been seen face-to-face but it is not the view the public has had.”

“The perception and the experience has been very different. If someone waits on the phone for an hour and repeatedly rings back they aren’t seeing that the practice is very busy.”

Here I feel compelled to interject. I sat in a surgery and watched a ringing phone for a very long time while two receptionists were doing nothing but chatting to each other. I was sent for an X-ray that day and I am still in ignorance of the result.

The speaker claimed that surgeries have been getting up to one thousand calls a day. (If two receptionists were on duty for eight hours, say 500 minutes that is a call a minute. You may speculate if that 1,000 call claim is true.)

“You don’t understand that” the speaker proclaimed with the supreme arrogance typical of too many health professionals, “especially if it is a repeated pattern and you have been trying every day to get an appointment. It was a problem pre-pandemic and has only got worse since then.”

“76% of survey respondents were very or fairly dissatisfied and many added everything else is open, why not GPs? Why do we have to wait out on the pavement” or as in one case I know of made to use cars in the car park as a waiting room and undergo a consultation through an open window.

The speaker went on herself to describe the most awful lack of service dished out by Bexley Primary Care Services. It is little wonder that the most extreme comment received here about GP services is that those not providing a service and therefore no use to man nor beast should be taken out and hanged. GPs should take note of the extent to which they have lost the trust of the public and in some cases are despised.

The survey showed that patients did not feel things had improved since the ending of lockdown, presumably because they haven’t. “Satisfaction rates [about getting an appointment] were poor” but better once one had been obtained.

“27% of respondents who failed to get an appointment simply gave up” hence the increased number of deaths in the home presumably but “I expect the changes are here to stay”. In summary, the new system is not working well in Bexley but we will most likely stick with it anyway.

Questions followed but this report is depressing enough already.