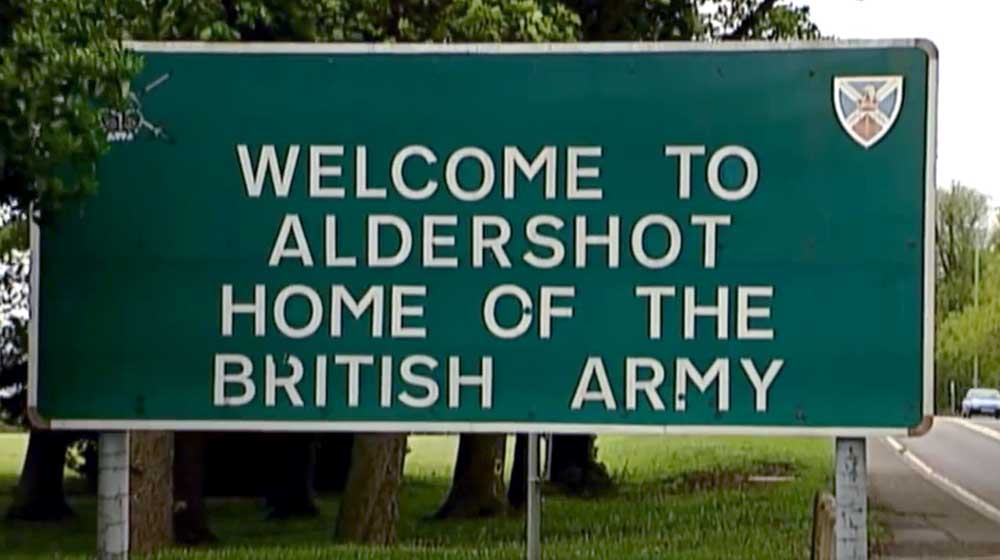 When I knew the North East Hampshire garrison town of Aldershot well it called itself The Home of The British Army. Throughout the 1950s I would change buses there on the way to school. The artillery barracks in the town centre were unchanged since my grandfather was posted there in 1913 and the smell from the stables would sometimes gently waft across the town centre which was the area’s biggest shopping centre; so much so that my young sister thought it was called Alltheshops.

I bought my first house in Aldershot in 1965 for £3,400 and sold it four years later for £4,200 which at the time was thought to be an extortionate price I was lucky to get.

Aldershot is now a shadow of its former self thanks to the British Army being reduced by a succession of political pygmies to the point the military could not fill Wembley Stadium. I still have friends living there but the town is now an unloved backwater which the world can safely ignore.

Until last week that is. A former soldier and Aldershot resident Retweeted a picture created by the Reclaim Party leader Laurence Fox. The police took no interest in Fox’s original picture.

The abridged version is that seven policeman turned up at the old soldier’s door followed by his arrest, handcuffing and being slung in a cell. So unprofessional that they couldn’t even be bothered to read him his rights.

Aldershot is now world famous again. Newspapers from New York to Sydney and across Europe have seized upon the story as a prime example of how Britain is now a lost cause; corrupt from top to bottom and woke beyond belief at every level.

Maybe I should remind readers that it was not only the Metropolitan Police that was labelled corrupt by the Daniel Morgan Independent Panel; so was the Hampshire force that blatantly lied when asked to look into the Met’s failed murder investigation.

It may not be in quite the same league but the idiotic abuse of power on display in Aldershot is not a world away from what happened here in Bexley in 2011.

Bonkers repeated something put out by Hugh Neal on his Maggot Sandwich blog but it was me who was on the receiving end of the unwelcome attention of Bexley police while they rightly ignored Hugh. I was immediately threatened in writing with arrest and later accused of threatening arson because Hugh Neal quoted, and I repeated, Frankenstein author Mary Shelley’s metaphor about flaming torches and pitchforks.

The police claimed that the officer who threatened me with arrest had moved on and was untraceable, an obvious lie, while documents in my possession are divided on who prompted him. One says a Councillor who wished to remain anonymous and the other strongly indicates it was the Leader herself. The most plausible deduction even without the police documentation.

Eventually Bexley Police apologised for stepping out of line and in Hampshire the Police and Crime Commissioner has said the action by her force was disproportionate. I think she means it was contrary to the guidance issued by the College of Policing and should never have happened. Abuse such as that on display in Aldershot should result in instant dismissal for the police concerned if there is to be any chance of public trust being restored.

But just like Cressida Dick who was severely criticised by the DMIP and acknowledged by the IOPC to have breached professional standards walks away unpunished, except by public opinion, nothing will happen and the slide towards totalitarianism continues unabated.