Bexley Council always seems to go quiet in the Summer months. There are no meetings that might tempt me away from the TV screen (*) until the beginning of next month and even that clashes with something else.

So on a slightly disappointing June day - where has the sun gone? - down go an old man’s recollections of strikes, their causes and their motivation.

The current period of public service disruption, railways today with teachers, postal and health service workers lining up behind them, brings back a whole load of recollections for me. From 1963 through to 1985 I frequently found myself negotiating with unions at local, regional and occasionally national level. Has anything changed since then?

It wasn’t my full time job but a necessary part of a management role in the General Post Office Telephone Service and its successors. No training was given, it was a case of just muddle through and try not to make the same mistake twice.

I soon learned that the quality of management was almost universally abysmal and union officials sometimes - definitely not always - spiteful, politically motivated and not interested in their membership.

Among my earliest recollections is the Polish lady who ran the local branch of the Union of Post Office Workers (UPW), circa 1964, teaching me that it was not advisable to drink the unpronounceable brand of vodka she brought back from Warsaw.

I also recall that when the MINcing Lane operator calls were to be transferred from the [Throgmorton] AVEnue exchange to ROYal [Mint] in 1965, no staff volunteered to transfer half a mile down the road.

With no agreement on how to choose the ‘volunteers’, the Polish lady went over my head to a boss who agreed that she personally should be allowed to make the selection. The aforesaid boss had forgotten that AVEnue staff were represented not only by the UPW but also the much smaller, but unrecognised locally, National Guild of Telephonists. An early lesson on how senior management in the Civil Service was so very often ignorant. All the transferees were NGT members. I forget how that one was sorted out. 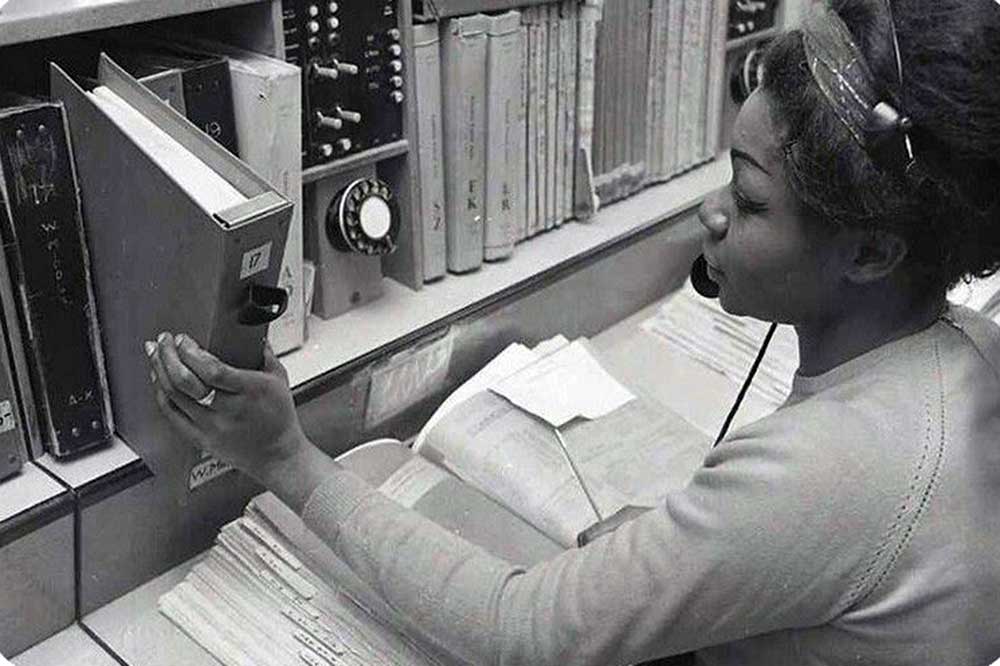 In the later 1960s the need for operators began to recede with the coming of Subscriber Trunk Dialling (STD) but there was no respite for Directory Enquiries. In the whole of London there was only me and two assistants looking after DQ as it was called.

To cope with the rapid expansion we designed a simple and cheap new enquiry suite formed of readily available office tables instead of the massive purpose designed switchboards used hitherto. The picture is of the one in Putney to which I was a frequent visitor although certain features indicate it predates my involvement.

We found some spare accommodation at Forest Gate exchange and I rang the manager there to fix an inspection date. Upon my return I was hauled into the big boss’s office for a dressing down about not having sought the union’s permission to visit the exchange. My protestations that it was the local manager’s job and not mine cut no ice.

Imagine it. The senior management in the GPO thought that they could not look inside a telephone exchange without union permission.

The new enquiry suite in Forest Gate proved to be a success and we installed another in Orpington but my relationship with Mr. Cobbold never recovered. He was not impressed by me keeping at least some parts of Directory Enquiries going through the Post Office strike of 1971. On the day decimal currency was introduced I was crossing a picket line in St. Albans.

After producing the first computer compiled telephone directory (the Sunbury local) I managed to get away to the only job that took me to union headquarters in Clapham, visiting at various times between 1971 and 1975. During those years the union people were happy to tell me to my face that it didn’t matter whether management conceded their demands or not, they were going to stay on strike. The subject matter was the International Telegram Service and the fact that it would die if not modernised was of no interest to them. Impeding progress was their game and political mayhem their only objective.

Around ten years later the same people told me in response to my direct question that their primary ambition was “to wreck the careers of as many senior management as possible”.

In the late 1970s, because it was my area of expertise, I was summoned to the Director’s office where he had got himself in a muddle negotiating with regional union officials. I dug him out of his hole and was rewarded with a letter of thanks which said he had no idea that middle managers could negotiate with unions so successfully. What an arrogant bastard thinking that only those who had risen to the very top knew how things worked. Probably I should not have told him so.

I became more and more convinced that management was almost always incompetent and whenever they felt it necessary, they would lie. They were distrusted by union officials and stalemate was the norm for negotiations. After taking on a new responsibility I promised the union people there that I would resign my new role if they ever caught me out lying or deceiving them.

This evolved into a code whereby I would scratch my nose if the management team was bulls****ing at meetings and this eventually translated into my unit becoming more productive than any other and the least strike prone. For some reason the men, who traditionally worked through the night, were much more amenable to change than the females who predominated during the day. (Until the Equal Opportunities Act of 1974 the demarcation had been absolute.)

Because the men were generally more cooperative - and that may translate into being more easily drunk under the table - some telephone exchanges were able to operate an on-demand call service at night to many countries which were pre-booking only by day. Neither the Union HQ or senior management knew about the faster service provided until the Canadian authorities sent a thank you letter to my boss and let the cat out of the bag. (†)

Typical of management at the time, he was not happy about it. Customer service was of little interest to them, following union instructions was always the priority.

Incompetent management not knowing arse from elbow was always a problem. One year, just before Christmas at a time when some families could only keep in touch via a pre-booked overseas telephone call an HQ imposed budget would stretch to a maximum of 96 operators on duty. Fortunately my calculations, which the union accepted, showed I would only need 88. They nevertheless refused to settle for anything less than 96 and took their case to the man who had dictated the 96 staff limit. He gave them 102. The union men could hardly stop laughing.

Most of them were flexible enough for me to get along with and probably they are all long since dead from alcohol or nicotine poisoning. They never did a day’s work and spent their lives in the pub. All Irishmen or Scottish for some reason. Full time union officials were paid as if they were telephone operators and not by the union.

One lower down the pecking order was Ray who commuted in from Brighton and was a huge Margaret Thatcher fan. In a quiet moment I told him that I thought we were about 30% overstaffed and his response was that if I allowed him to choose who to get rid of he’d lose 50% of the staff and no one would notice the difference. That never happened and it was a bit too reminiscent of the Polish lady at AVEnue exchange many years before.

No one truly came out on top of these battles, the management didn’t have a clue, none had ever done the job they were supposedly in charge of (††) and the union officials at HQ level refused to see how technology would eventually remove their members’ jobs.

If one fails to heed the lessons of history the mistakes will be repeated. Not a single one of the buildings I worked in remain, at least not in their original form. I am only in fairly regular contact with one former work associate apart from four that remain on a Christmas card list. That one is the Union official with whom I worked through the 1970s. There would not be much to say to former managers if a falling out was to be avoided.

* Still no TV licence but YouTube and an expanding collection of UHD discs provide an entirely adequate replacement.
† The night time procedural changes directly affected UK callers only but the necessary engineering adjustments also improved all services routing across London and terminating in another country. Automation ensures that none of that happens in 2022.
†† There was no progression route from telephone exchange work into management.