If you put ten gallons of petrol into your car you have about 360 kilowatt hours of energy stored in the tank which can create quite a big bang if it should be ignited. The same goes for electricity. An electric car with a large battery, and the Hyundai Kona’s 64 kWh battery will be featured here, will also release rather a lot of energy in a hurry if things go seriously wrong.

Fortunately they don’t often go wrong and what statistics are available suggest that EV fires are five to ten times less likely than petrol fires for the same distance travelled. Naturally enough the EV gets the publicity when there is a fire in the same way that a Tesla hits the headlines if some clown assumes it has full self-driving capability. 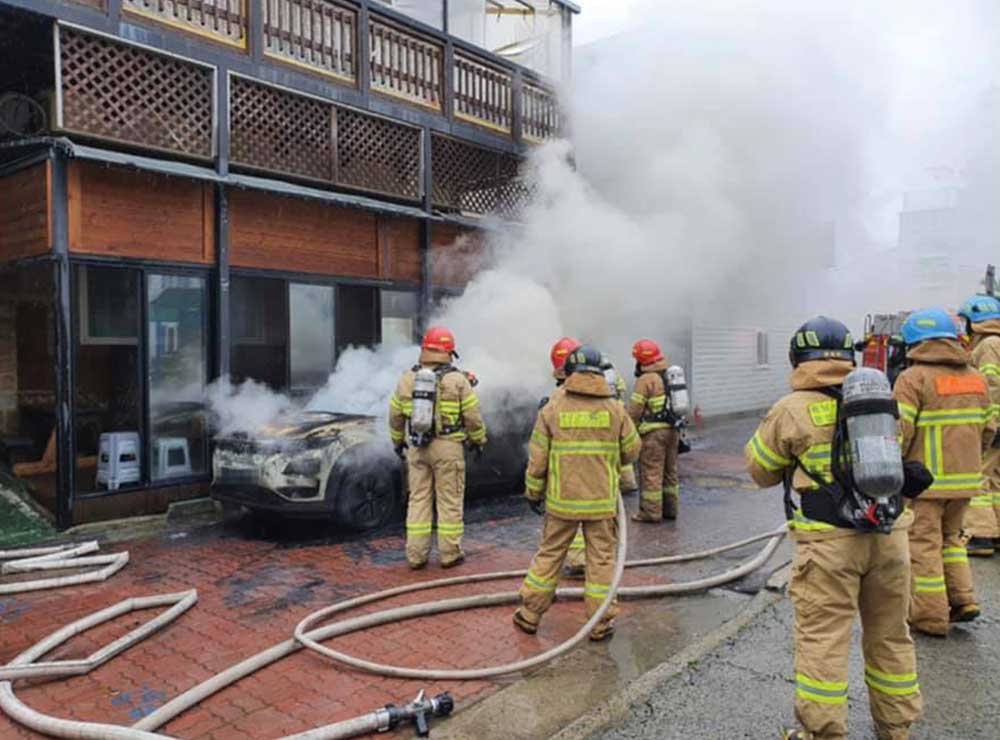 Doing its best to ruin the reputation of electric vehicles is Hyundai and in particular its UK division.

A Hyundai Kona went up in flames while standing in its owner’s garage in Canada in July 2019; no one was sure why but then it started happening in Korea where the car is manufactured.

The fires were so intense that there was little left to examine and maybe find where the fault lay. Hyundai was left with little option but to install new software on the Kona that performed extensive battery checks during the charging cycle. There were several revisions to the software during the summer of 2020 which led to a slower charging regime while it stopped at both 80% and 90% and did whatever the software did.

The cars continued to catch fire and the battery manufactured in China by LG Chem was the likely cause.

Early this year a car caught fire in Korea while parked close to a fire station which allowed examination of the battery. The fault definitely lay with LG Chem batteries supplied by one of its factories. Basically a case of faulty assembly.

By February Hyundai decided it must replace 82,000 batteries at a cost of a £640 million.

So far so good but where would the batteries come from? They are always in short supply. Hyundai decided to stop selling the Kona in Korea freeing up some batteries.

1,241 of the faulty batteries were in UK cars delivered between September 2018 and March 2020. The Kona had a one year waiting list at one time, hence the relatively small numbers. Mine is one of them.

Hyundai UK wrote to me demanding that I never charge my battery beyond the 90% mark (in the USA they said 80%) and sign a declaration to that effect. They also recommended I did not keep it in a garage. Awkward; that is where my charger is and the insurance insists it is kept in a garage overnight.

Their legal obligation is to give me my money back or repair the car. Naturally they chose the latter but at no time have they said when the battery might be replaced.

It is five months since Hyundai identified the cars with faulty batteries and in the UK not a single one has been replaced. Worse than that, there has been no communication with customers either. Emails go unanswered. USA cars are getting their replacement batteries reasonably quickly, presumably because their laws are more robust than ours.

Hyundai UK has offered some compensation for a car which can no longer perform as it should and which they have rendered unsalable. That compensation comes in the form of thirty quid’s worth of charging vouchers. Vouchers for which you have to pay a £1·99 registration fee before they can be issued.

Faulty batteries are not Hyundai’s fault and in my opinion the Kona is a much better car than my son’s Tesla Model 3. It cannot go quite as fast and the 0-60 time lags by a second but it is far better built. The software is mainly more advanced on the Tesla (if you pay the extra money) but the Kona is more of a traditional car. It has around 40 buttons to press while the Model 3 has only a screen with menus and icons. They appeal to different sorts of people.

However having chosen LG Chem batteries Hyundai UK is not doing anything obvious about rectifying the problem. It is all very well saying they will repair the cars; but when? Unlike in the USA where Hyundai is giving buyers their money back there is no redress on the UK.

1,241 owners have crippled cars which are next to impossible to sell with no idea of when they might be repaired and run a small risk of being incinerated. Hyundai value the inconvenience at £28·01.

The moral of the story must be avoid buying Hyundai, the UK subsidiary is useless in a crisis and cares for customers not one jot.