Assault and attempted criminal damage by their self-service till Assistant.

There is something very odd about Abbey Wood Sainsbury’s, for most of the day it is near deserted and I would guess that the turnover must be low which in turn leads to the need to watch the Best By dates like a hawk. I only use it for my old aunt’s shopping, the gluten free selection is not nearly as good as Tesco’s.

With another load of shopping due for delivery to East Ham later today I thought I would pick up her bits and pieces early, I was at the self-service checkout by 8:15 and not for the first time the damned thing was reluctant to work. It has been happening so often over the past month or two that I suspect most customers will have experienced the same, you scan the item and nothing seems to happen, then five seconds later or thereabouts it pings and is ready for the next item.

It is both annoying and confusing because you don’t know whether to put the item in the bagging area or not. I gave up after four or five items and moved everything to another till. The uniformed woman supposedly supervising the two customers under her nose was too busy gassing to her man friend to notice.

The new till was initially much better but then it stopped altogether so after a few seconds I indicated that some assistance was required. The woman came over and I opened the conversation by saying “I think you need a new computer”. The woman was much more interested in continuing the conversation with her gentleman friend and returned to him immediately without saying a word.

I told her that I thought her behaviour was more than a little rude and she shouted back that she was not going to speak to me “if I spoke to her like that”. Like commenting on the slowness of the tills?

When I asked her to call a manager so that I could register a complaint her response was a refusal. A clear statement that she would not do so.

I paid for the three items that had scanned and went to the customer service desk and in response to a call for a manager a man appeared quite quickly. He was pleasant enough but was no manager. He said he could only accept a written complaint. When I said it would be a lot easier if I simply recounted the episode on Twitter he literally pleaded with me not to. Instead he asked me to fill in a complaints form and promptly departed.

The complaints form consisted of a small sheet of paper torn from a spiral bound note book. Naturally it did not ask anything, time of incident, who I was, who I was complaining about and except that I knew it was the woman still gesticulating towards the service desk I had no idea. 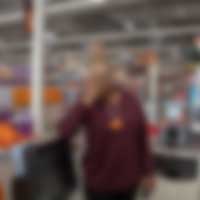 I decided that a proper written complaint was justified and to provide ID of who was at fault I snapped a picture on my way out. The woman immediately charged out of her little self-service compound and leapt upon me pulling the camera from my grip, said she was going to smash it on the ground and attempted to do so. I managed to keep hold of the strap while she held on to me and tried to pull me over.

Fortunately the security man restrained her while she accused me of taking the photograph so that I could trace her address and as she put it “attack her kids”. Apparently oblivious to her committing Common Assault and attempted Criminal Damage she said she was going to call the police and proceeded to make a phone call.

By then I was surrounded by five Sainsbury’s staff determined not to let me leave the store. The manager showed up to make six and he asked what had happened. He didn’t seem to be very interested in the fact that one of his staff members had just assaulted me and tried to wreck my property but maybe I didn’t make that case as forcibly as I should.

I walked away unimpeded.

I doubt the manager will do anything about a member of staff with a fuse so short that she should never be allowed anywhere near customers. Maybe this account will persuade him that he should.