6 April - When the simpler option is the better option 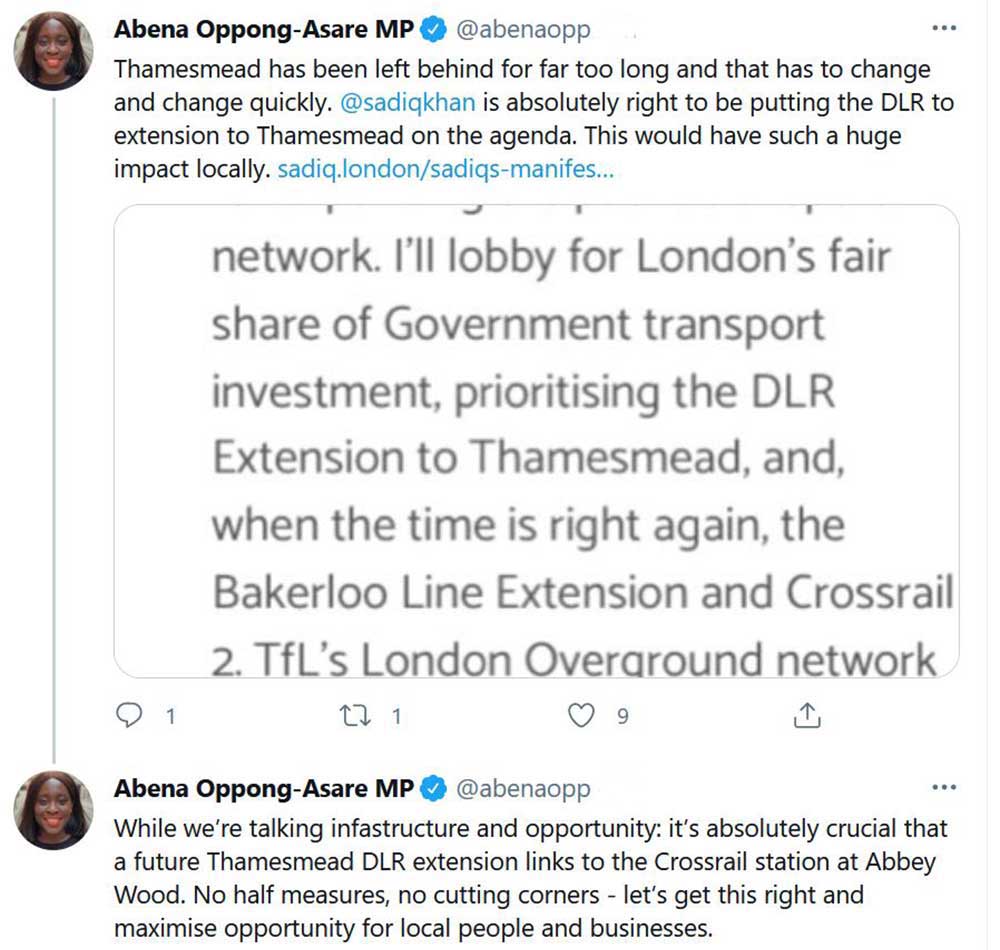 The MP’s Tweet is partially right. A DLR extension from Barking to Thamesmead should be on the Agenda but it is not so certain that it should carry on to Abbey Wood.

There might be some benefit for London bound Thamesmead commuters but very few will live near the station so their many varied bus routes will continue to carry the bulk of the load. For the Canary Wharf area it would be a better bet to head off in the other direction avoiding Crossrail and taking the DLR all the way.

Probably Murky Depths understands the situation better than our MP who has presumably jumped on the Greenwich Council band wagon.

Longer term, with the likelihood of a Crossrail extension through to Belvedere and beyond and Bexley Council’s plans for 8,000 houses in that area it might make a lot more sense to extend the DLR through Thamesmead to Belvedere giving its growing population more transport options. Abbey Wood will be spoilt for choice eventually and there is no room to get a railway line along Harrow Manorway without demolishing the not yet completed work or burrowing underground.

There was a time when the MP for Erith & Thamesmead would put her case in a way that might carry more weight than a quickly forgotten Twitter post. Contrary to the plea put forward today it may well be a “half measure”, not “right” and not “absolutely crucial”. Short sighted too.

Former Erith & Thamesmead MP Teresa Pearce’s ideas which may still be supported by Labour In Bexley should be looked at again. They are reproduced in full below. (Briefing Note.)

The current proposals are for a new station be built in Beckton, with a bridge over or, more likely a tunnel under, the Thames to a new station in Thamesmead. Both sites are subject to lots of new housing( circa 25,000) being built, or planned, and the DLR extension was included in TfL’s latest financial plans. 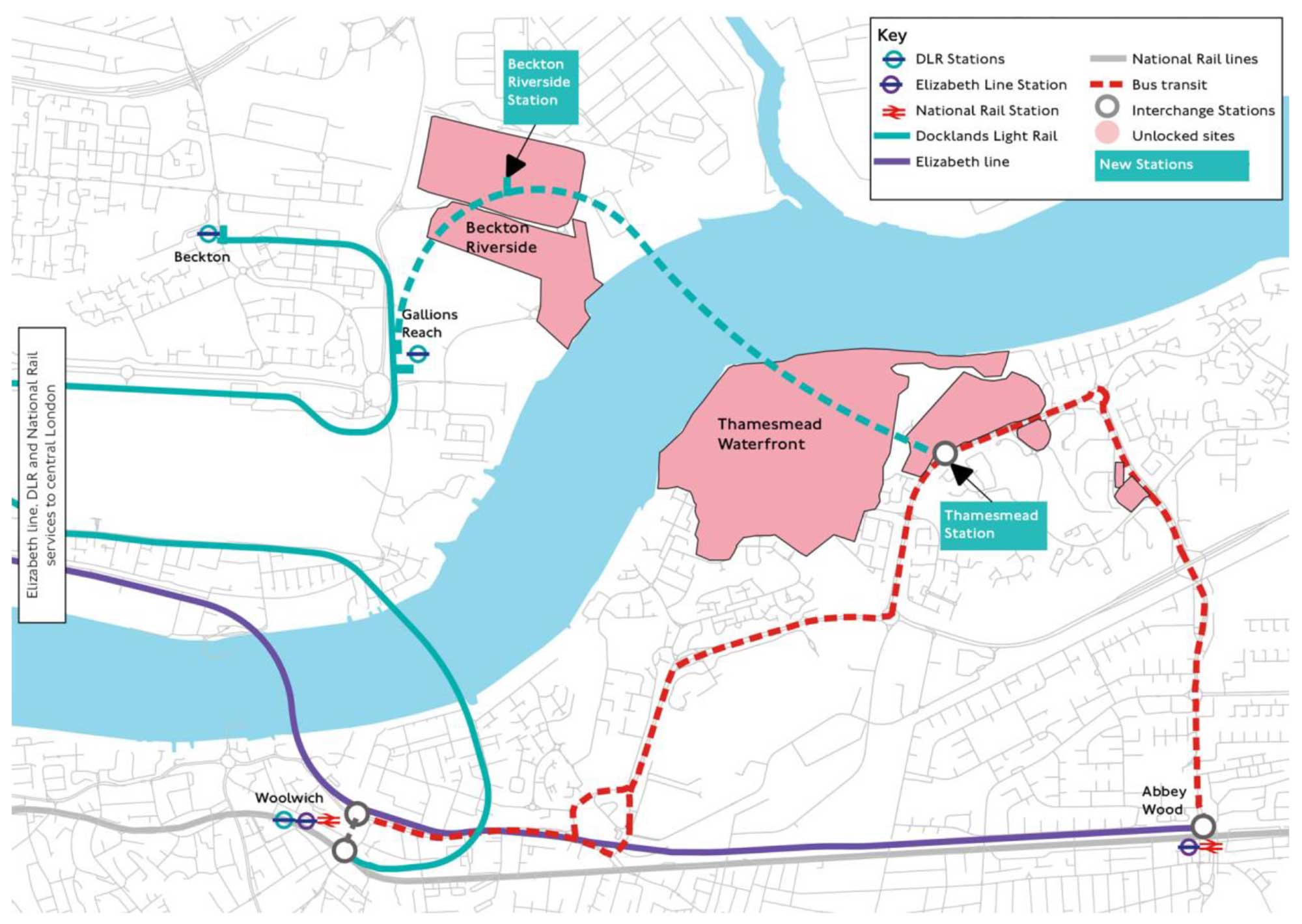 If the DLR extension is built, then it’s provisionally expected to be able to offer 15 trains per hour – roughly one every four minutes. Although construction work is a very long way from being funded, TfL has secured the £1 million for feasibility work on the line so that they can clarify the likely route and look to identify any issues and/or future problems.

The feasibility work will be carried out by TfL, while Arup and Atkins, as part of a joint commission, will be responsible for design, engineering and environmental assessment.

The £1million will be completely funded by external partners, through a joint funding agreement between the London Borough of Newham, the Royal Borough of Greenwich and developers Thamesmead Waterfront, Aberdeen Standard Investments and St. William. Thamesmead Waterfront is a joint venture between Peabody and Lendlease while St.  William is a joint venture between Berkeley Group and National Grid.

This work will enable TfL and partners to further develop the proposed DLR extension from Gallions Reach in Newham to Beckton Riverside, and then across the river to Thamesmead.

This next stage of technical work will allow further development of the route and the potential locations of stations to be considered. Support work on other transport options within the OAPF will also be carried out including options for a rapid bus corridor and new walking and cycling links.

It is this location of stations that is a concern. Currently the possible plan is for the route to come across to central Thamesmead with a stop at town Centre and another at Carlyle Road as shown on this picture. 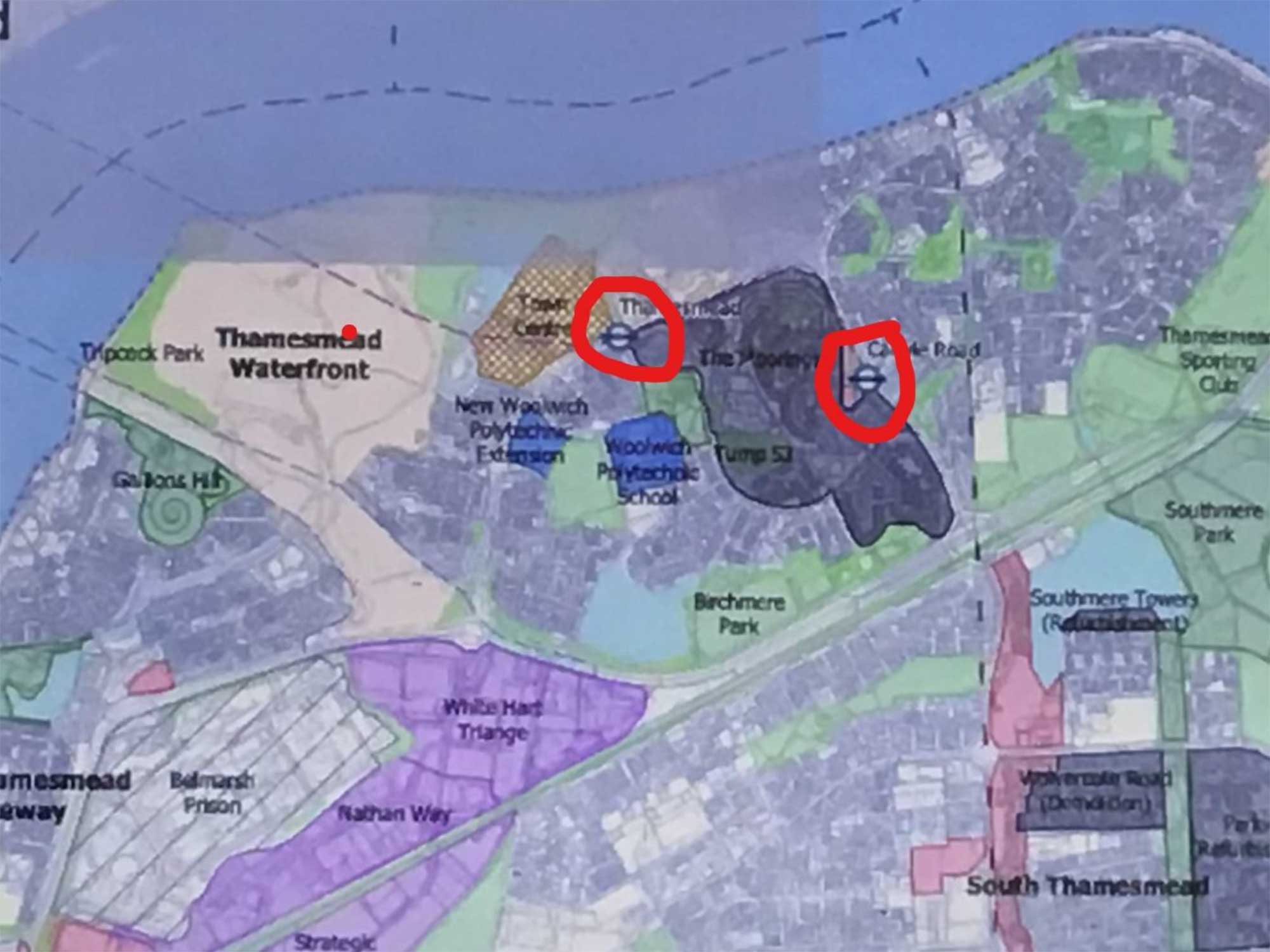 In discussions with TFL in 2017 it was proposed that the DLR could have stops at Thamesmead Town Centre and Carlyle Road and then move across to a stop at Belvedere Station. This would get the maximum benefit of unlocking potential in an area (Lower Belvedere) that is sorely in need of regeneration and housing. There are a number of reasons why this is a good option and the best solution.

1) The route from Carlyle Road to Belvedere would go mainly across land already owned by Peabody as well as some brownfield areas.
2) This route would mean that very few existing properties, if any, would be demolished
3) This route would unlock the potential of areas around Belvedere station for housing.
4) This route would bring a much needed transport link to the poorly served area of Belvedere and Erith.

Originally there was a proposal to link Belvedere to the north of the river via a bridge but this was deferred by the Mayor when the DLR was proposed. This would mitigate that decision and unlock the huge development area of North Belvedere for much needed regeneration.

The route that is being suggested, by some, of Carlyle Road to Abbey Wood is flawed in a number of ways.

1) To get to Abbey Wood the route would either have to rebuild Harrow Manorway (which is nearing completion) in a hugely costly redesign that has taken four years to complete or it would mean demolition of a large number of social rented properties on the Abbey Wood estate.
2) Any demolition of social rented and privately owned properties across the Abbey Wood estate could involve compulsory purchase and possible legal challenge, which would escalate costs and result in delays.
3) The construction of Crossrail caused a serious flooding problem in Abbey Grove area. Further piling and construction could worsen the situation.
4) It’s probable that the Thistlebrook travellers site that would be affected and may need to be rehoused by RBG elsewhere in the borough.
5) Abbey Wood station itself is already served with routes to central London, north London and Luton (via Thameslink). When the full Crossrail route opens, an Elizabeth line service every five minutes at peak time (only 8 minutes to Canary Wharf) will also allow passengers to catch one train right through central London to Paddington, Heathrow or Reading in the west
6) This DLR route would be more costly, maybe prohibitively so.

It is understandable to want connectivity and to wish for the proposed DLR to link to an existing transport hub at Abbey Wood but surely it makes economic and social sense to link up poorly connected places to unlock potential rather than concentrate on one already well connected site. For these reasons we would urge all elected representatives and community voices to press for the Belvedere option.