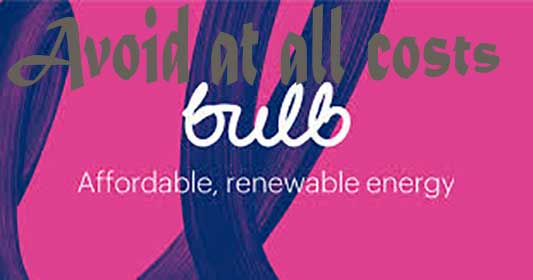 Two years ago almost to the day a free £100 was offered here to any reader who chose to switch their energy supply to Bulb. A number of them did so and I wish to apologise to them all. Bulb is absolutely useless when something goes wrong, it has also become very expensive.

Due to a software glitch one of those referees received the referral bonus that should have come to me. Bulb told me it was my fault for circulating the wrong referral code. When I sent them a copy of the automated email which confirmed the correct code they backed down and said they had fixed a software problem. Soon afterwards it happened again.

In November 2019 Bulb unilaterally disallowed one of my referees his Economy 7 tariff. They said they were going to replace both his meters because they had come to the end of their life. Fair enough but when he went to read them at the end of the month he found there was only one meter to read. Bulb ignored his complaint and continued to demand two readings.

After three months of being ignored Bulb was shamed into action via Twitter. Bulb responded by actually moving him from the Economy 7 tariff thus legitimising in their view the mistaken removal of the second meter. By then they had admitted it was a mistake but did not offer to replace it.

When a further complaint was made Bulb offered monetary compensation which was accepted, however it was never forthcoming and their customer found himself another energy supplier.

A second referee began to use less energy than hitherto at the beginning of the first Covid lockdown but found Bulb’s website would not allow him to enter a suitable Direct Debit reduction, it allowed only tiny alterations. He used Bulb’s contact form more than once and emailed them several times. None was ever answered. The web chat took 20 minutes for each response which made contact effectively impossible. I suggested a Twitter shaming and it worked, along with the offer of compensation which never came.

In October 2020 I was notified of a very large price increase, 16% or thereabouts if I remember correctly, and I moved to a supplier which was the same price near enough as Bulb used to be and guaranteed it for 12 months. The change went smoothly enough and Bulb refunded some money to me and naturally enough their website saw some alterations. I could access old bills but very logically could no longer enter meter readings.

My aunt’s house in East Ham remains with Bulb and two weeks ago Bulb sent a message to say that they were going to increase the monthly Direct Debit by £38·03 a month because she was a large sum in arrears. When I looked at her Bulb account more closely I noticed it had my address on the bill, not hers and allegedly no gas had been used and only one unit of electricity. For this the yearly projection was said to be £692 for electricity and £77 for gas. On, according to them, no gas and perhaps 12 units of electricity. Something was very obviously seriously wrong.

I emailed Bulb and they merely said I must pay off the debit and offered no explanation as to why there was such a large debit on an account where the Direct Debit always exceeds consumption. I asked them to look again at the bill which very obviously has a wrong address on it (mine instead of my aunt’s) and consumption and payments which overpay Bulb each month.

When I drew this to Bulb’s attention again they once more offered no explanation but suggested I may have entered my meter readings into my account, hence the wrong address. An account which is closed and no longer accepts meter readings!

If only I could persuade Bulb to check back over past bills and find the cause of this confusion. Surely even they can see the bill has the wrong address on it?

So I too resorted to the Twitter shaming technique. (†) It worked. An immediate response. “Something must have gone wrong” they said and if I provided my email address and Date of Birth they would be in touch. DOB? WTF is that all about? (I complied with both requests.)

Since then another week has gone by with nothing until yesterday when Bulb emailed to ask how well I thought they had answered my complaint. They are jokers aren’t they?

Not a single word towards resolution but they want to know what I think of them.

The answer may be deduced from the above.

I am will consider cancelling my aunt’s Direct Debit to see if that will prompt Bulb into doing discovering where their error lies, then I will have to change the energy supplier. I think everyone on Bulb should do the same. They are totally incapable of resolving issues if anything should go wrong. And they have become far too expensive.