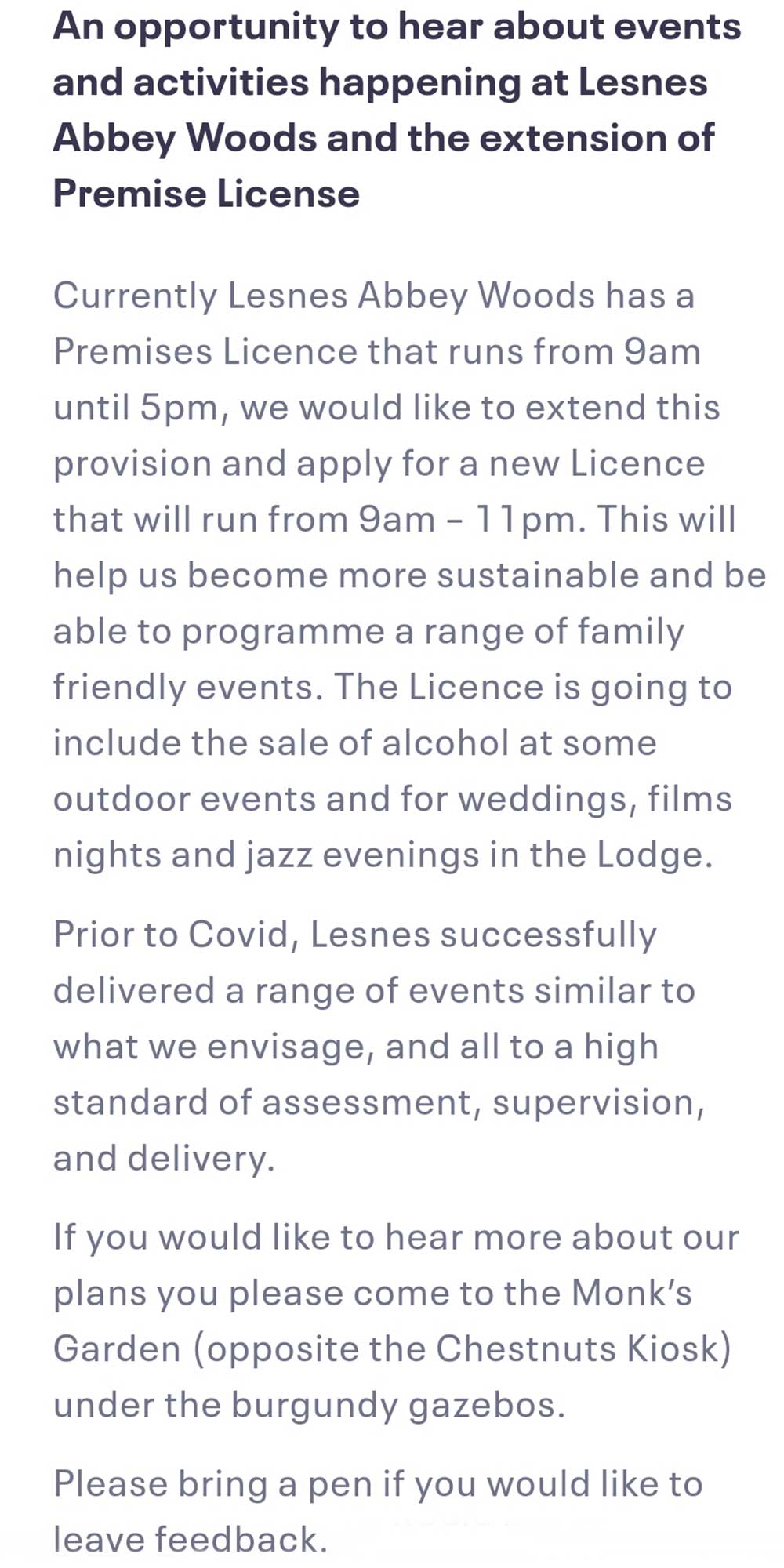 I was reminded yesterday of how this blog first came into being. I was excluded from the consultation on the narrowing of Abbey Road which is probably no more than 100 metres from where I am sitting right now. I have regarded Bexley Council’s consultation processes with suspicion ever since.

Twelve years later I have belatedly discovered that I have been excluded from the consultation on changing the activities licence for Lesnes Abbey Park which is two minutes walk away, if that.

If I had been notified I would have seen the Eventbrite invitation (see left) to a meeting held last Thursday evening. I wouldn’t have been able to attend but I am pretty sure some neighbours would have done so.

The proposal is to open up the park as some sort of party venue with music and booze. Personally I am not too bothered by that, it is probably a fair exchange for the screams of teenage girls that usually come from the park on a summer evening but there are residents who live much closer to the centre of the park than I do who may take a different view.

The person who didn’t bother to invite everyone who looks out onto the park to the meeting was Lindsey Weaver, Bexley’s Partnership and Activities Manager.

She is looking to have up to 3,000 people in the park which will probably cause a great deal of noise and block all the nearby roads. It can be impossible - literally sometimes - to drive home with the existing level of events which peak at a few hundred people, the annual Catholic church service being the most notorious for inconsiderate parking.

I understand that Belvedere Councillor Sally Hinkley took an interest in the event and residents of New Road and Monk’s Close were not too happy about what they heard.

There was criticism of the Council staff involved who at first sent out an invitation with a wrong date and phone number on it and who had little idea about the current licensing arrangements which were reluctantly agreed with residents in 2006. Their concerns now are much the same as they were then. Noise and road blocking. Monk’s Close in particular is a literal stone’s throw from what may become a music venue.

The expectation is that a new licence proposal will be made public within the next week or two.

The panel below is an extract from a revised and corrected letter to a very few local residents. Click the extract to see it all.

The letter goes on to say, “Prior to Covid, Lesnes successfuly delivered a range of events similar to what we envisage”. Bexley Council is renowned for not telling the truth; there have never been prolonged 3,000 guest events hosted there ever before. Not since Richard De Luciְ’s opening day knees up anyway.