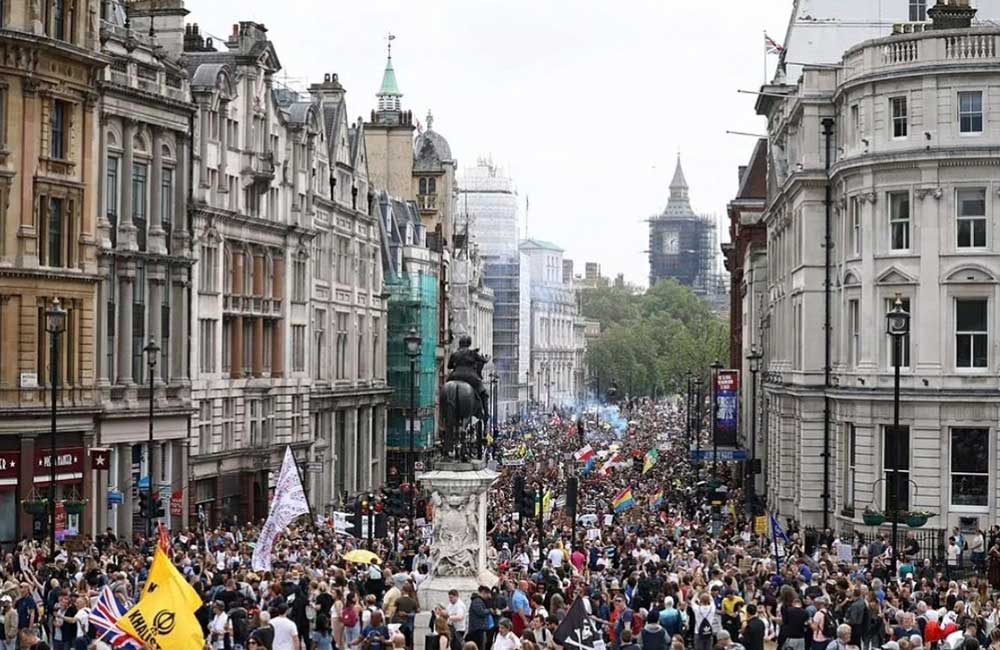 I took the train to London yesterday and there were few masks in evidence. Changing at that appalling interchange station known as London Bridge (†) I at first estimated the number of the maskless to be close to 50% although I later scaled that back to 30%.

It became apparent that there was an anti-vaccination passport demo in London which explains the platform rebellion. It is worrying that on the day itself one had to go to Russian websites to find any reference to it. Is our own media so totally in hock to a less than honest government? (Today LBC Radio reported 12 miles of protests.)

The trains out of Waterloo were very frequent but jammed solid. Standing room only and any bug on board would have had a field day.

At Richmond rugby ground there were no Covid restrictions in the Members’ Bar apart from card only payments and an hour before kick-off six assistants were waiting to pounce on their only customer. The beer flowed more liberally later.

To stretch my legs I circumnavigated the ground where the crowd, such as it was, leaned against the boundary rail one or two people deep. The stand was near empty due to an unprecedented decision to charge extra for sitting down. Not a single mask anywhere. Literally not one.

Life seems to be getting back to normal. Later today the old pub quiz team will reconvene but not in a pub. As a team we used to be successful but our skills are waning. No one seems able to add up to six or even two.

There is little Bexley news around right now and what there is is being held over until June. It is not only the national press which suppresses news!

† I can remember when changing from a Cannon Street train to one for Charing Cross meant walking from one side of an island platform to the other. Yesterday it was from Platform 3 to Platform 9 via two long escalators and the main destination boards. I can remember when journeys took barely half the time it does now.

Due to an act of stupidity on my part the original 3001 blog was lost. This is a rewritten replacement and may be considerably different to the original.