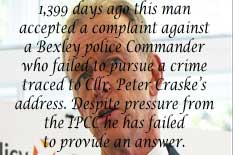 Tomorrow it will be 1,400 days since Elwyn Bryant and I made a formal complaint about the then borough police commander’s failure to take any action against the perpetrator of what was referred to at the time as Bexley Council’s obscene blog.

And since then not a lot of progress has been made.

We made the complaint to Metropolitan Police Commissioner Bernard Hogan-Howe exactly a year after the infamous blog was accepted as a crime by Bexley police. They took just over two months to tell us that there was no chance of tracing the culprit.

That first complaint was thrown out by the Met’s Directorate of Professional Standards (DPS) who told us that no police officer had done anything wrong. By then more than enough had come to light for Elwyn and I to be pretty sure that wasn’t true and where the DPS report strayed into the IT arena it was simply nonsense.

The case was referred to the Independent Police Complaints Department (IPCC) who sat on it for rather a long time. By the time they came back with confirmation that they too thought the Met’s response was inadequate, Elwyn and I had come to the conclusion that it wasn’t incompetence that led to the failure of the crime investigation, it was corruption.

One of Bexley’s police officers actually said as much to us. “The case has been crippled by political interference.”

Elwyn and I made a formal allegation of Misconduct in Public Office against two borough commanders.

We knew for certain that something like eight months had gone by between the police belatedly tracing the source of the blog and arresting the suspect, Cabinet Member for Closing Parks, Peter Craske. Plenty of time to lose the evidence if there was any. We also knew, because we had a copy of the relevant document, that Bexley Police, Bexley Council and the Crown Prosecution Service had all got together to devise a method by which “Councillor Craske’s situation could be resolved”.

Since sending that allegation to the IPCC in December 2013 (they forwarded it to the Met) I have received 19 letters from the Met Police apologising for them not having found the time to progress their investigation. It took six months before they would agree that it might be a good idea to get the file from Bexley.

A few months ago the Met made an issue in the press of their success in getting complaint answering down to under twelve months which looked like an excuse for me to chase them up again.

My MP, Teresa Pearce, has always been very supportive, twice accompanying me to meetings at Bexleyheath Police Station. Elwyn has had nothing but carefully chosen words from his MP, James Brokenshire. No practical help at all. On hearing of the protracted delay, Teresa agreed to my request to refer the unresolved complaint about the five year old crime to the Home Secretary if the DPS could not demonstrate some progress. I wrote to Hogan-Howe requesting an update.

An Assistant Commissioner got back to me quite quickly to say the case had been concluded by the investigating officer but was found lacking by a senior officer. Is that just another delaying tactic?

Elwyn and I are now being asked what our complaint is so that it can be reviewed. Maybe I read to much into those words, but I thought we had made that pretty clear at the outset.

It is no doubt a complex case which is why Elwyn and I twice offered to explain it in person in 2014. We were ignored. Now, suddenly. a meeting is a good idea. The date isn’t fixed yet and Teresa Pearce has agreed to keep me company again. Elwyn’s MP has told him that to offer such assistance is “inappropriate”.

How is it that the Bexley officer who took over the case at the end of the active enquiry can come clean and say they were got at by politicians but more than three years later the DPS appears not to have seen the same evidence? Elwyn thinks they are waiting for us to die off. He may be right.