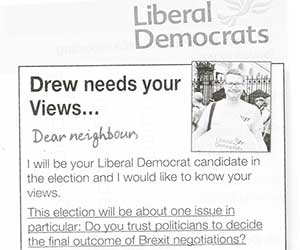 Well they got that wrong didn’t they?

The Lib Dems candidate in Old Bexley & Sidcup, Drew Heffernan has issued a questionnaire to voters in that constituency.

He says this election is all about Brexit. How deluded can you get?

Drew spoke at the Erith & Thamesmead’s hustings and it was pretty clear he wants a rerun of the EU referendum so you can change your mind.

The Old Bexley & Sidcup hustings are on video too. https://www.youtube.com/watch?v=6rN8kBMIZOg

Not had time to look yet but a number of people have reported that Danny Hackett acquitted himself really well. Probably Drew is there too fighting yesterday’s battle.

Note: The videos are no longer available.