It’s a day for moaning, you may wish to look away now.

BT
When I first worked for that outfit if your line had a fault you dialled ENG and an engineer on the Test Desk situated at the far end of the equipment room would put down his pack of playing cards and plug his headset into the jack socket to answer the call. Dependent on the nature of the fault he might wander along the equipment racks, hammer or whatever in hand, to identify the incoming line and wiggle or clean the relay contacts and with any luck the fault would be fixed. Easy; I did it myself more than once even though it wasn’t my job.

Yesterday a friend told me that every once in a while his phone bell rings continuously (not the usual ring ring sequence) and the only way to stop it is to unplug the phone and hope. Often it would ring again when plugged back in but if it was left long enough the ringing would stop.

Regardless of the fact that I never worked on a digital exchange I’m asked what is wrong. Probably an exchange fault.

On to bt.com I go but it rejects the friend’s password. I set up a new one only to find that there doesn’t seem to be a way of reporting a landline fault apart from a chargeable text message from a mobile. The Chat facility reports Busy.

I go round BT’s web loop several times cursing as I do so while looking for alternative options but always returning to the same place. Then I notice that Chat has become free.

After an interminable rigmarole of questions I am told the line has been reset and all will be well now. No it isn’t, any confidence I may once have had in BT being a customer focused company has gone. I am very pleased that one of my lines is being ported across to VOIP. Any more of that nonsense from BT and I will port the other one too.

The NHS
I waited ten minutes or so for today’s appointment and was seen by a lovely lady who called herself a nurse physician. She checked my blood pressure and said it was very good although it was the highest I had ever seen. After various other tests she pronounced me very fit and unlikely to die in the immediate future but nevertheless sent me off to QEH’s imaging department to be checked out.

She was truly excellent; not so the receptionists, at least as far as I could see.

Throughout the ten minutes wait a phone was ringing, it may have been two calls in quick succession but it was still ringing when I came out of the nurse’s surgery. Two people could have answered. Probably a third call, at least I hope so.

More concerning was the young woman in the waiting room with toddler in tow who was speaking to him in a foreign tongue. When she was summoned to the desk it became apparent that her command of English was not good. As Eric Morecambe may have said, all the right words but in the wrong order.

She was asking for a doctor’s appointment for her “baby” which may have been one at home because the toddler was happily running around ripping notices about the two metre rule off the wall, a lad of some intelligence obviously.

Mother was told to go away and use eConsult which is difficult even for the computer literate English speaker. Mum had tried to use it before without success so a minor dispute followed. Mother was eventually and without a shred of compassion given the requested doctor’s appointment. For 17th September. With luck the baby won’t be dead by then.

When the nurse came out to give me the imaging request form I asked her if the NHS would ever get back to normal. I really liked her but not what she said. The doctors have decided not to resume a traditional health service or words to that effect. What did Hippocrates say? Something about “to treat the unwell to the best of one’s ability, to do no harm and preserve a patient’s privacy while teaching the secrets of medicine to the next generation”.

Pity the old fellow was not asked to pontificate between the relative levels of harm between a consultation and an ill-designed web page. 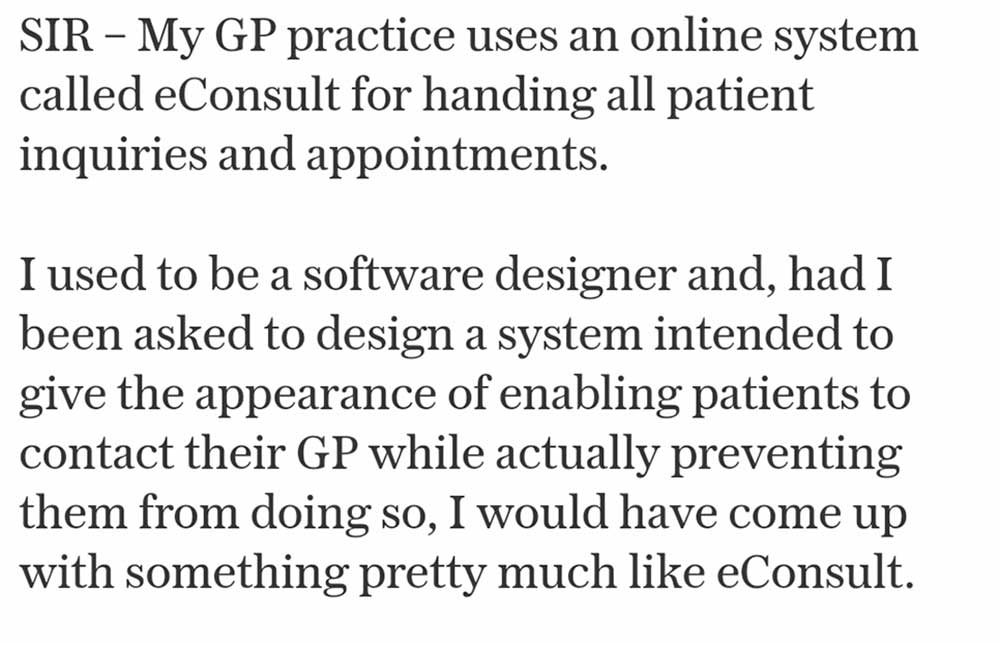 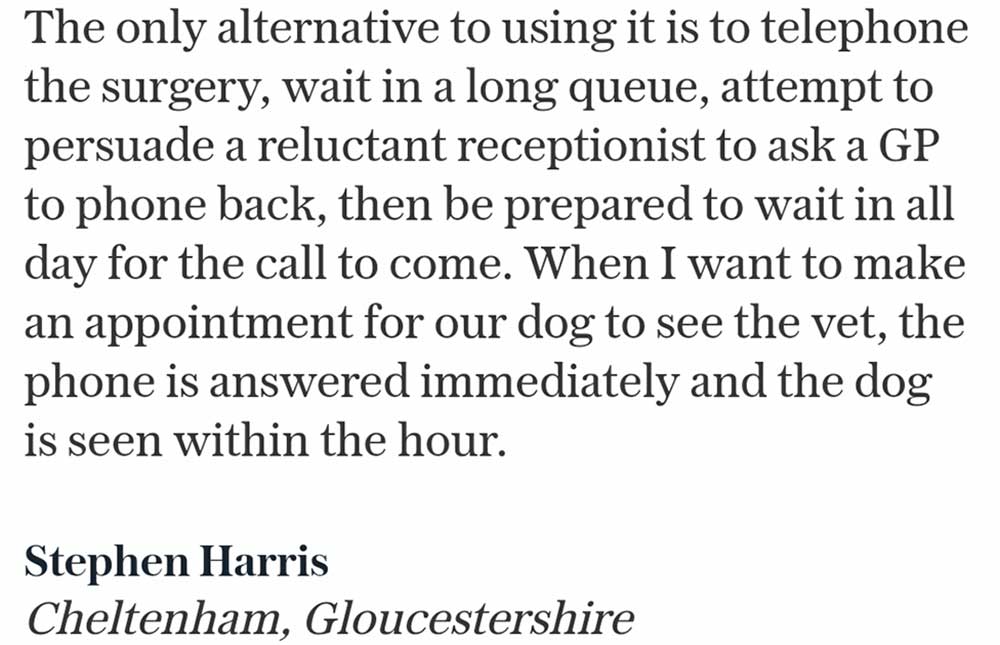 The disaster that is e-Consult.

A waste of £350?
I needed an eye test. Years ago I discovered an independent had swindled me after I paid for new glasses which weren’t as good as I had hoped. He couldn’t understand why because “they are exactly the same prescription as last time”!

I used Spec Savers for several years but the Bexleyheath branch never answered the phone and this year were Covid phobic to the extent of passing glasses to customers through the door. I walked away.

Vision Express had a big cut out of Gary Lineker in the window which was another turn off for me. He earns far too much already and I don’t want to augment his salary.

I found another optician and had my eyes tested. I was then persuaded to have the more expensive lenses for a wider corrected view plus whatever it is that makes them go dark as a “protection against cataracts”. Believe it if you like.

Two weeks later I collected the new specs and promptly walked into a wall - I exaggerate only a little - and had to quickly grab the handrail when I went half way up the stairs and changed my mind and swung round. Stepping off a bus became more of a danger than it should have been. I have worn bifocals for more than 25 years so it should not have been a question of getting used to them.

Back I went to the optician who was very sympathetic and bent the frames around a little bit. It made no difference.

One evening I turned on the TV to watch a borrowed DVD and noticed the menus were not sharp. By a lucky chance I covered my right eye and was rewarded with a crisp screen. Covered the left lens and it was all a bit fuzzy. Inclining my head and wiggling the lenses around showed that no part of the right hand lens provided a sharp image.

The cricket scoreboards were the same. I could read them with my left eye but not the right and the same went for the Department of Transport number plate test. Everything beyond eight or ten feet away was fuzzy. I reverted to my 2017 vintage glasses after that. Problem solved

Back I went to the optician. This time they somehow measured the lenses and then sent me home to fetch the two year old glasses because I had only taken the 2017 pair.

Loads more measuring and then another two week wait for another eye test. It came up with exactly the same result as the first one.

The verdict then was that somehow the extra special lenses didn’t suit me. Now I am not an optician but I did study optics for A Level Physics and passed with top marks but some of what I was being told simply didn’t make logical sense to me.

If the extra special lenses didn’t suit me how was it that the left lens was really good?

The new glasses duly arrived and guess what? The same problem as before, well not quite the same. If I look at the unsharp TV menus and tilt my head down the very top part of the lens provides a sharp image. Impractical but it did. Unfortunately I found I couldn’t confidently drive with them at all. The old 2019 pair saves the day.

So I am not only in danger of losing my £350 but I have used up my free eye test quota which prevents easily starting again. On the other hand the test fee is probably insignificant compared to the £350. Poundland might be attractive in future.