3 January (Part 2) - How many of your neighbours are dead? Check here

I will be in trouble if my daughter reads this but I haven’t listened to any BBC radio programme apart from a few that she produced for, I don’t know, probably more than three years. Until then I only ever listened to Radio 4 but it got to the stage I was simply not trusting any of their news items. A shame because there were some good investigative programmes broadcast which I miss but I have never done much channel hopping so once I abandon a station it tends not to be listened to ever again.

The presets on my radio are tuned to LBC, LBC London News, Times Radio and TalkRadio. In general terms I avoid LBC during the week but have it on at weekends - at least until David Lammy comes on. He is just too full of himself and superior to everyone. “This is my programme, not yours.”

LBC has gone pretty much 100% woke over the last few months and slavishly follows the OFCOM rules which forbid it going against the Government’s Covid mantra. I was not impressed at all when at 08:25 this morning their presenter referred to the PCR (Polymerase Chain Reaction) test as the accurate one while implying that the Lateral Flow Test was rubbish. PCR is the one whose inventor said shouldn’t be used for virus testing but the NHS administers with its sensitivity turned up to near maximum.

I didn’t turn Andrew Castle off as I like to hear what such people are arguing and judge for myself if nonsense is being broadcast. To my horror the same message was repeated at 11:25 by Tom Swarbrick, one time special adviser to Theresa May. They are either ignorant or following the OFCOM script. Either way I am less inclined to believe what comes out of LBC Radio which confirms my decision to give it a miss for most of the week. 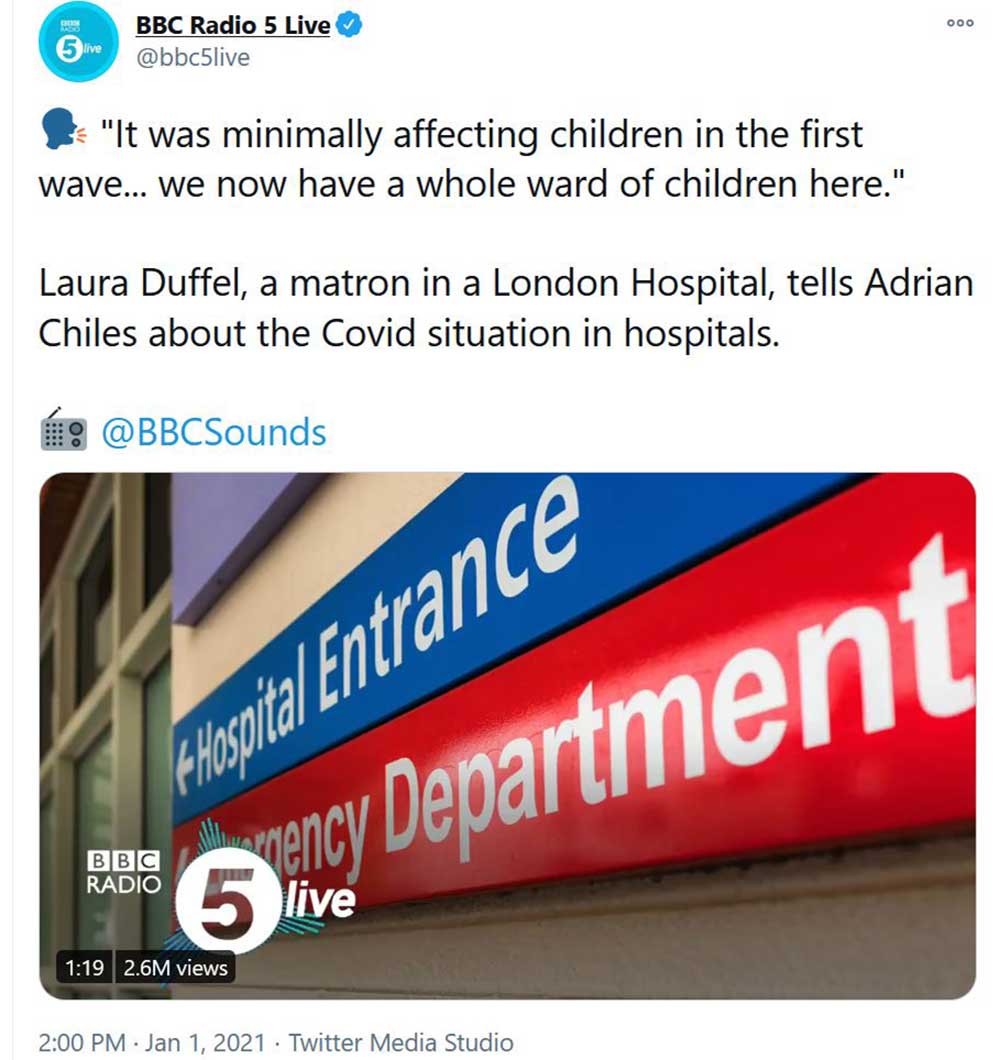 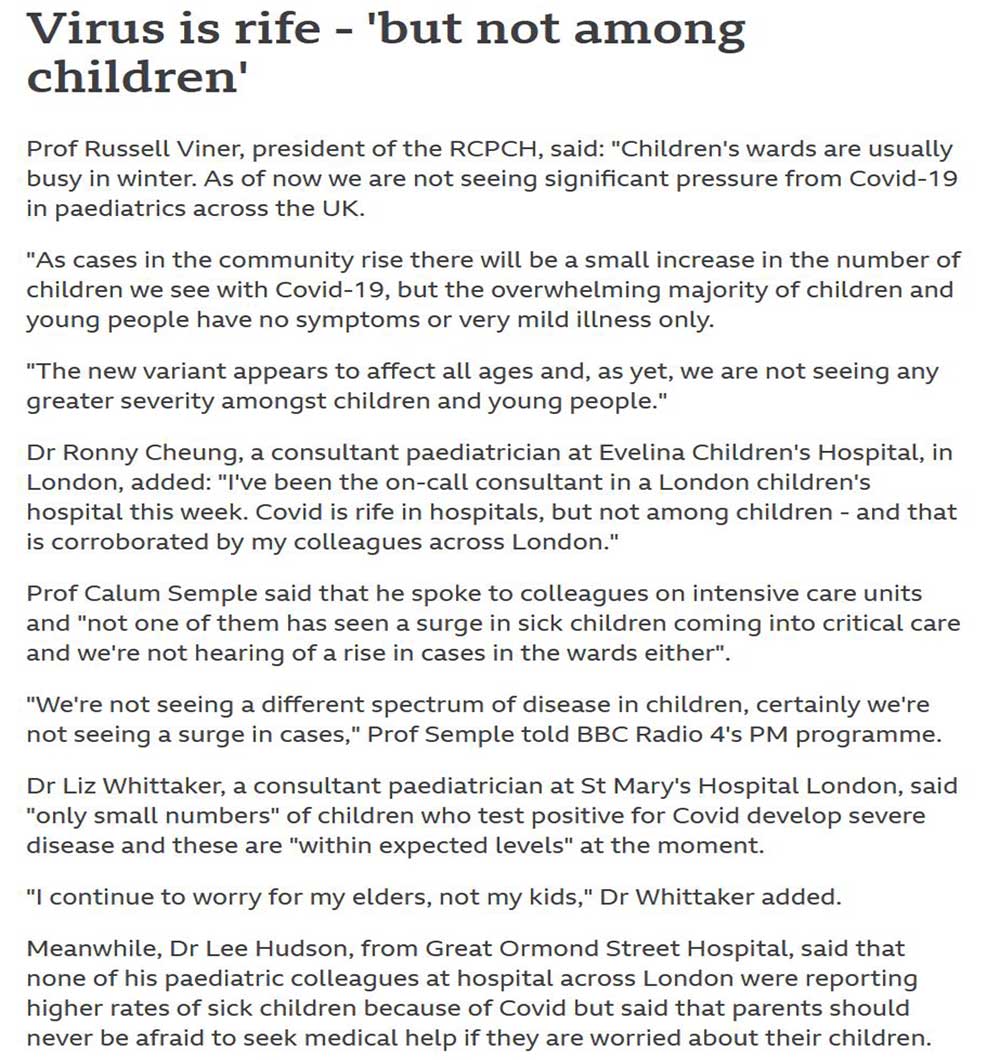 Probably such misinformation doesn’t compare with the scare tactics of the BBC. They interviewed a Labour activist nurse who said that her hospital was full of Covid sick children and Radio 5 tried to scare as many people as possible by Tweeting the lie. And lie is what it was. Rebutted by qualified medics everywhere but not withdrawn by a dishonest BBC. Ironically the second image above is taken from the BBC’s News website but the damage has been done. Parents are naturally worried about the safety of their offspring and from that no doubt flows the serious schools closure dilemma.

The number of deaths reported daily are scary and the tactic works. Irrationally I kept far more than two metres from a neighbour yesterday who had just returned from his daily shopping trip, and not a local one either. Even sceptics like me are influenced. I know that the death numbers are inflated because the Office of National Statistics tells me they are. it will be interesting to see the December figures when they go on line.

Click that link, type in your postcode and be surprised/horrified (delete as appropriate) by the number of Covid dead near you. My nearest neighbour to the West is a large old people’s care home. Still not that many deaths compared to cancer etc. 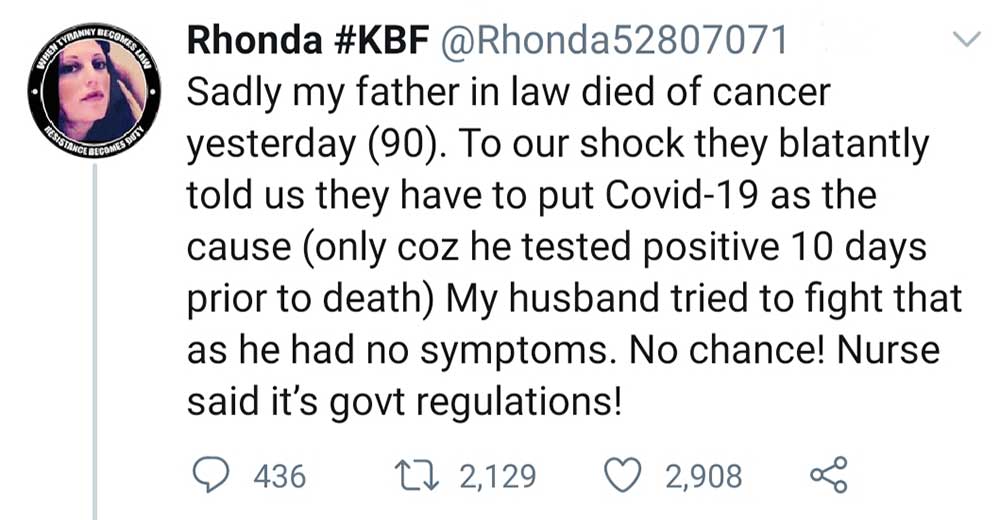 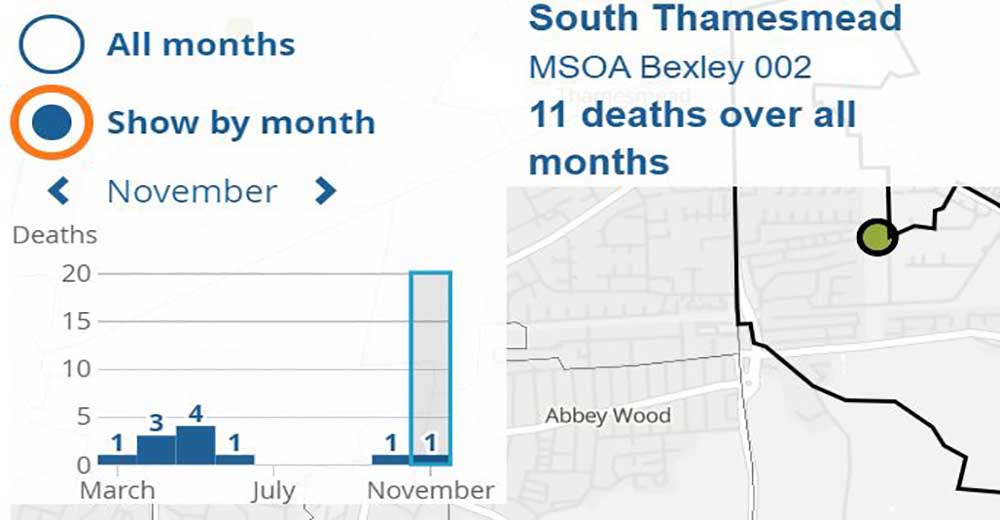 How many times have we read what Rhonda says here? For reasons unknown, Hancock and Co. are intent on misrepresenting the stats. Hopefully the Office of National Statistics has not yet stooped to his level.

There is just one medically qualified person within my circle of family and friends who is in a senior position at a hospital in a medium sized town best known for tourism. Reports reaching me were that the hospital there was much busier than in the Spring, which was worrying. Then yesterday a more direct report came through. Much busier because they are trying to treat non-Covid patients who were abandoned to their fate eight months ago.

The message must be don’t do anything silly, stay in as much as possible but don’t be scared witless by a Government that has lost the plot. No, never had it.